Peace be with you. 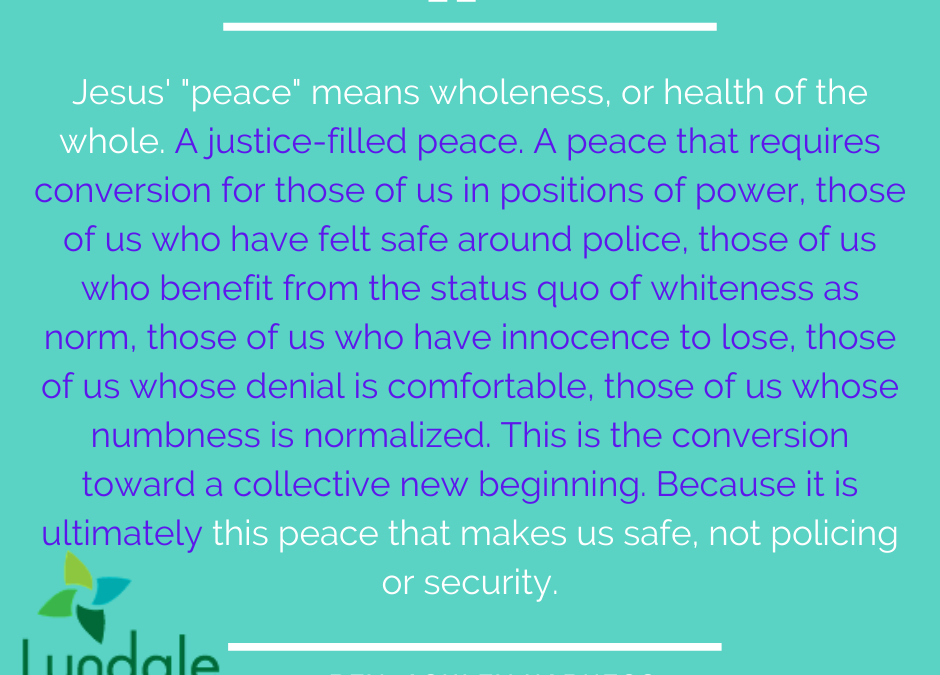 Beloveds. I just want to sit with you in silence awhile. I want to sit and breathe and hear your breath turn with me into songs of mourning.

“Were you there when they crucified my Lord? My child? My parent? My friend?”

I feel haunted in my bones. We have witnessed another crucifixion. Another lynching. Another police murder. More than one, actually. And another mass shooting too – with at least half the victims being of the Sikh faith. This week has been too much. Too much death. Too much white supremacy. Too many guns. Too much pain. Too much grief. Too much fear.

Into another moment, another place, another raging hot reality of death at the hands of hate, Jesus appeared risen to his beloved disciples. The first thing he said when he saw this group of 11 after his resurrection was, “Peace be with you.”

I keep thinking about this moment. But in my prayers and imagination, the risen Jesus takes on new form. He looks like Daunte, holding his 1.5 year-old son. He looks like Adam, only 13, hands in the air in celebration instead of terror. He looks like Breonna, freshly awakened from a peaceful dream. He looks like George, vibrant and breathing.

But what is this peace Jesus proclaimed and, in my prayers, each of these beloveds proclaims too? This is not the perverted peace of the Roman authorities, the Pax Romana. That was a false peace. It was a peace that masked the violence and war of the Roman empire. It was an unjust peace and a fragile peace.

Another name for this kind of fake peace is security. Think “security guard.” Think weapons and military. Think national guard with their assault rifles on so many of our street corners in Minneapolis this week. Think the Brooklyn Center Police Station and the so-called “keepers of the peace” in their riot gear and tanks deploying tear gas and rubber bullets and sound cannons.

I have been reading one of my favorite theologians again this week, searching for meaning. Her name is Dorothee Soelle. She grew up in WWII Germany in a Christian family that sheltered Jews in her home. She spent her life trying to understand her country that so deeply confused peace and security that “keeping the peace” came to mean executing millions of people.

She says: “The old vicious circle takes this form: We are afraid and we teach others to be afraid. We seek safety – that is, we wall ourselves in and hide behind the armor plate of power, hide in control towers of devastation, feel weak again, and therefore feel compelled to [violence]… Christ broke out of this vicious circle in which we still live… He told us…You are strong; you are beautiful. You do not need to build any walls to hide behind. You can live without armaments… God is in you. You do not need to protect yourself [like this]”[1] … “[Jesus calls us to]…conversion from security to peace.”[2]

How could we live together in real peace, in mutual flourishing of resources and care of each other? Can you imagine what that would feel like in your body? When have you felt deeply at peace, deeply safe in your own skin and body? How did you know you were safe? What did that peace feel like? Where were you? What did it look like?

I pray for us to open our hearts and minds to the possibility of a new reality of peace that looks nothing like how we live now, that doesn’t involve police. In the words that Black Lives Matter shared last summer after George Floyd was murdered, “The safest neighborhoods don’t have the most cops. They have the most resources.” There are brilliant researchers and policy makers who have thought for a long time about new ways to create public safety beyond policing. I’m not one of those people. I’m pretty new to this conversation. And policy is not my job. My job is to help us expand our moral imagination, to raise the voices of those closest to the pain who also know best the way to healing. So to stretch us into that possibility, we are going to watch a poem by local poet Janauda Petrus called “Give the police departments to the Grandmothers.” (please watch!!!)

“Peace be with you,” says the risen Jesus, another brown man killed at the hands of the police of his day. “Peace be with you,” says Daunte. Says Michael. Says Adam. Says Breonna. Says George. Say the multitudes. And they are risen again, each of them. They are reaching out to their own beloveds like Jesus reached out to his, beckoning them and telling them it is OK to embrace them, to break bread together. And they are telling us, like Jesus did, to bear witness. Look closely. Feel their pain.

We have been complicit in their deaths. But if we truly bear witness, if we truly accept the gift and demand to let peace be with us, we may also participate in their resurrection. And our own.