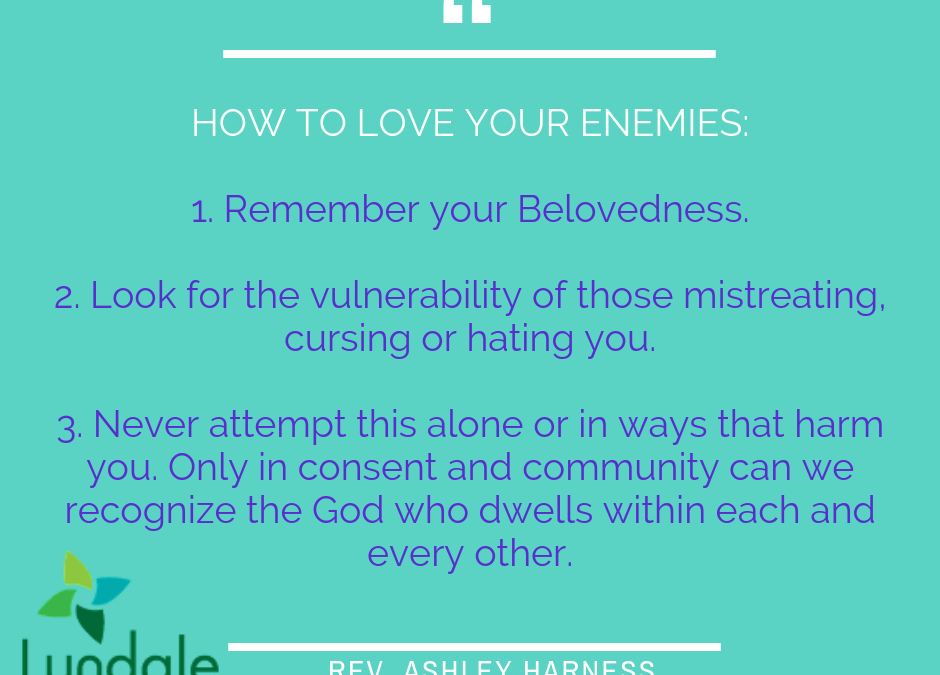 Meg was a freshman in high school and a brilliant mathematician. She had a little brother who was, if it was possible, even more brilliant than she was. He was brilliant not just in the ways an IQ can measure, but at loving people. His name was Charles Wallace. Unfortunately for him, this combination didn’t go so well in his elementary school classroom. Kids thought he was weird and his teachers didn’t know how to keep up with him. Meg was determined to prevent Charles Wallace from enduring the same fate of bullying she had lived through as a little kid by confronting her old principal and nemesis in whose office she had spent far too much unjustified time, Mr. Jenkins. This is the beginning of the famous Madeline L’Engle novel, A Wind in the Door from the Wrinkle in Time series.

As the story unfolds, the fate of not only Meg’s beloved little brother Charles Wallace but the whole of cosmic harmony will come to rest on Meg’s ability to love her enemy Mr. Jenkins. But as Meg explains to the cherubim angel who has come to earth to help her on this adventure, “If you mean you think I have to love Mr. Jenkins, you’ve got another think coming,” Meg snapped.I had one of those weeks when I opened up the lectionary, read that this was our text, and snapped at God much like Meg snapped at the angel in A Wind in the Door.

That’s because we live in a world where evil is everywhere. News breaking about more and more sexual abuse in the Catholic church. Financial greed of a few causing poverty that allowed a murderous fire to tear through homes in Bangledesh. The continued separation of children from their parents at our nation’s border. The brutal politicization of the access to health care. Just to name a few. Evil is real. And yet, Jesus tells us to love our enemies.

What does that mean? Surely, like Meg standing up for her little brother, we are still supposed to demand that the powers that be act justly and care for those who are vulnerable. I don’t think Jesus is telling us that loving our enemies means abdicating our power to demand justice from them. “Justice is what love looks like in public,” as Cornel West says. It turns out, there’s a whole line of biblical scholarship looking at this particular text as a text of non-violent resistance to oppression. It’s pretty cool stuff. Here’s a synopsis of the part of our text about giving up your coat:

It’s likely that someone asks for your coat [in Jesus’ time] in repayment of a …debt. You owe your oppressor something and since you have no land and very little money, your oppressor asks for your very coat. Now there were very clear restrictions regarding the repayment of …debts. You could not leave a debtor naked at sundown no matter what he or she owed. It simply was not to be done. It was against every sense of decency and good order. So Jesus sets up another strategy of resistance. If they ask for your coat, give them your shirt too. There you’ll be standing half-naked; they’ll be forced to deal with this new reality you’ve set up. “No, no! No, no!” they say, “I don’t want your shirt. Put it back on!” They might be so disarmed that they’ll return your coat as well.[1]

In other words, this text describes a kind of creative, direct action resistance tactic that demands dignity from the powers that be.

Let’s go back to Meg. How does Meg go from recognizing Mr. Jenkins’ abuse of power and willful ignorance to hating him and deeming him her enemy? And how does that serve her? In other words, how do we go from recognizing evil to creating enemies and why, frankly, does it make us feel better sometimes?

Psychologists note that identity is more easily sustained when there are clear external factors that build limiting boundaries. Sociologists explain that the creation of, and defense against, enemies creates social cohesion and strengthens social identity. Anthropologists describe rituals that use emotions such as disgust and awe to strengthen specific taboos, to affirm that which is “human” and that which is not—the latter all too quickly becoming “the enemy.” Cognitive scientists hypothesize that we remember with greater clarity and detail experiences that occur while the brain is flooded with adrenaline—thus experiences in the presence of an enemy might have especially sharp outlines that stay with us longer. [But Theologians caution that] The process of creating identity in the presence of an “other [or enemy]” leads us all too often to defining that other in less than human terms, creating an “object” that we now have permission to hate.[2]

It seems we have a choice when faced with evil, mistreatment, curses and hate. We can either turn the person in whom evil is working into an enemy, or we can love them. It usually feels a lot better in the immediate to turn them into an enemy. What is this love Jesus is talking about that is the alternative? Why is it worth it?

This isn’t romantic love. This is God-love, Agape love, in the Greek. This is the kind of love that asks us to see somebody as God sees them – as mere but also majestic humans. Meg’s angel friend describes this kind of love as naming love. The angel’s whole job is being what he calls a Namer.

“What does a Namer do?” [asked Meg of the cherubim angel namer.] The wings drew together, the eyes closed… Small puffs of mist-like smoke rose, swirled about him. “When I was memorizing the names of the stars, part of the purpose was to help them each to be more particularly the particular star each one was supposed to be. That’s basically a Namer’s job. Maybe you’re supposed to make earthlings feel more human, [Meg].”

God-love, naming in this way, then, isn’t about imposing a name from the outside, but helping somebody recognize who they already are. The bible, especially the stories in Genesis, are filled with stories of this kind of naming. One might look at the whole of creation as a story of naming, of all the elements of the earth coming together to be who they truly are as God names them. And then there are the stories of our ancestors in faith Sarai and Abram encountering God’s love and becoming Sarah and Abraham. And Jacob wrestling a blessing out of an angel and God re-naming him Israel. In each of these stories, the people look in the mirror that is God to see who they are. Instead of creating enemies, this is another way of organizing ourselves and recognizing ourselves individually and collectively.

“But how do I do it? How do I Name Mr. Jenkins when all I think of when I see him is how awful he is?” [asked Meg]. Proginoskes [the cherumbim angel] sighed and flung several wings heavenwards so violently that he lifted several feet, materialized, and came down with a thud. “There’s a word—but if I say it you’ll just misunderstand.” “You have to say it.” “It’s a four-letter word. Aren’t four-letter words considered the bad ones on your planet?” “Come on. I’ve seen all the four-letter words on the walls of the washroom at school.” Proginoskes let out a small puff. “Luff.” “What?” “Love. That’s what makes persons know who they are. You’re full of love, Meg, but you don’t know how to stay within it when it’s not easy.” “What do you mean?” “Oh—you love your family. That’s easy. Sometimes when you feel awful about somebody, you get back into rightness by thinking about—well, you seem to be telling me that you got back into love once by thinking about [your little brother ] Charles Wallace.”

And this is the secret of loving those who profess to hate you, curse you and mistreat you instead of turning them into enemies. In order to love like this, you have to remember that you are loved. And not just loved on your best day, but loved on your very worst day when you are your very worst self. For Meg, the person who she knows loves her like this is her little brother, Charles Wallace. When she can remember what it is like to be loved by her little brother, she can look at Mr. Jenkins differently. She can claim her power and see that Mr. Jenkins’ vulnerability somehow got all twisted up and tangled into the form of a bully. In other words, she can see him from God’s perspective and reflect version of him back towards him to receive.

Naming is a mutual process. One does not name another, one does not love another, uni-directionally. Sarah, Abraham and Jacob and all the heroes of our biblical stories do the spiritual work of receiving love. The stars work with the angel Namer to remember who they are, to be named. Meg naming Mr. Jenkins is just the beginning of Mr. Jenkin’s next chapter of his life – one in which he confesses his wrong-doing, leans on the angels to learn where he once upon a time got stuck and seeks to repair the damage he has inflicted with his power as principal.

And also important to note, Meg didn’t love Mr. Jenkins alone or non-consensually or in a way that could hurt her. I say this explicitly because this scripture text has been used by some to advise people in abusive relationships to stay in them and I want to be really, really clear that’s not my message. Meg took every step of her journey towards loving Mr. Jenkins as her own choice, accompanied by a community of angels and teachers who protected her while she did the incredibly vulnerable work of loving as God loves, of naming.

This is how we too are to love our enemies. We remember that we are beloved, first and foremost, by looking in the mirror that is God. Sometimes that means looking at ourselves through the eyes of our own Charles Wallaces. And from that position of power in belovedness, we are able to see the vulnerability of a person acting out evil, mistreating, cursing or hating us. In doing so, we become a kind of God-mirror to them, challenging them to be who they truly are. We never do it alone or in ways that harm ourselves. Like Meg, we take every step of compassion accompanied by our own communities of angels and teachers. We take every step together so that we can together recognize the God who dwells within each other:

This blessing takes
one look at you
and all it can say is
holy.

Holy hands.
Holy face.
Holy feet.
Holy everything
in between.

Holy even in pain.
Holy even when weary.
In brokenness, holy.
In shame, holy still.

Holy in delight.
Holy in distress.
Holy when being born.
Holy when we lay it down
at the hour of our death.

So, friend,
open your eyes
(holy eyes).
For one moment
see what this blessing sees,
this blessing that knows
how you have been formed
and knit together
in wonder and
in love.