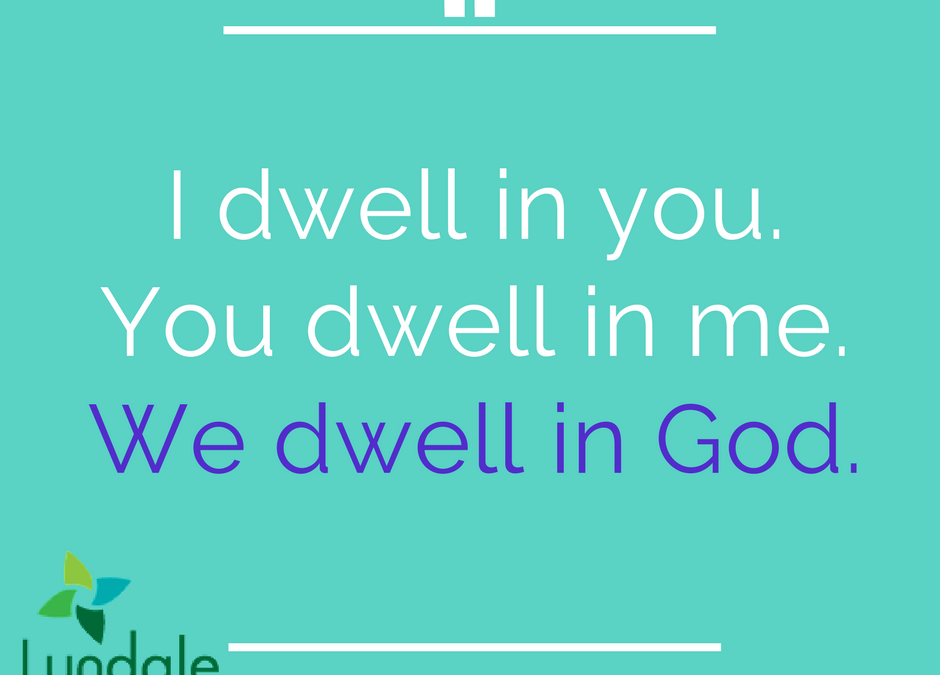 An excerpt from John 14, God-language updated for Mothers’ Day:

1 [Jesus said,] “Do not let your hearts be troubled. Believe in God, believe also in me. 2 In my Mother’s house there are many dwelling places. If it were not so, would I have told you that I go to prepare a place for you? 3 And if I go and prepare a place for you, I will come again and will take you to myself, so that where I am, there you may be also. 4 And you know the way to the place where I am going.” …Philip said to him, “Lord, show us the Mother, and we will be satisfied.” 9 Jesus said to him, “Have I been with you all this time, Philip, and you still do not know me? Whoever has seen me has seen the Mother. How can you say, “Show us the Mother’? 10 Do you not believe that I am in the Mother and the Mother is in me? The words that I say to you I do not speak on my own; but the Mother who dwells in me does her works. 11 Believe me that I am in the Mother and the Mother is in me; but if you do not, then believe me because of the works themselves. 12 Very truly, I tell you, the one who believes in me will also do the works that I do and, in fact, will do greater works than these, because I am going to the Mother. 13 I will do whatever you ask in my name, so that the Mother may be glorified in the Child. 14 If in my name you ask me for anything, I will do it.”

I have a confession to make to you all. As much as I love my moms, I despise Mother’s Day. I loathe it with a passion. I would go so far as to say, in fact, that I hate Mother’s Day.

Why, you ask? Well, in summary, because I currently have 4 moms. 5, when you count my mother-in-law and love. As a little kid, having plural moms, aka, a gay family, meant that my family was like a square peg in a round hole on Mother’s Day and Father’s Day. It was the 1980s, mind you, so it’s not like there was a lot of sensitivity to different kinds of family constructions, even at hippie-dippy schools like mine. I felt a lot of pressure on that day to validate the realness of my family in a largely homophobic world. I didn’t have those words at the time. But their spirit lived in me.

Then my parents divorced when I was 8 and for the next 10 years until I left for college on the East Coast, I shuffled between households on Mother’s Day, preparing multiple meals, making multiple special gifts and writing multiple cards as the number of moms grew from two to four. That day was like a pressure cooker of all the various and sundry family dynamics in addition to the cultural dynamics we didn’t jive well with as a gay family. In short, I grew to hate Mother’s Day – both politically and personally.

Why am I telling you all this? Really, I’m not just unloading on you. Though, I have to say, it does feel good to just vent for a moment. All the reasons I hate Mother’s Day are related to a vast secular and commercial hijacking of this day from its original purpose in our country. Mother’s Day is not actually supposed to be about brunches and flowers and the heteronormative model of family reinforced by every store you walk into. Mother’s Day began in 1870 as a peace protest. Just for some context, this was right after the Civil War, during a period of national turmoil as states re-unified and reconstructed the country with a new set race relations raw and riled. Abolitionist and suffragist Julia Ward Howe wrote a passionate proclamation calling for what she called Mother’s Peace Day.

Here’s an excerpt: “Arise, all women who have hearts, whether your baptism be that of water or of tears! …From the bosom of the devastated earth a voice goes up with our own. It says, “Disarm, disarm! The sword is not the balance of justice.” Blood does not wipe out dishonor nor violence indicate possession. As men have often forsaken the plow and the anvil at the summons of war, let women now leave all that may be left of home for a great and earnest day of counsel. Let them meet first, as women, to bewail and commemorate the dead. Let them then solemnly take counsel with each other as to the means whereby the great human family can live in peace, each learning after his own time, the sacred impress, not of Caesar, but of God.”

Perhaps Mother’s Day was originally much more in line with the work of our Racial Justice Taskforce here at Lyndale that we celebrate today, than the brunches many of us will attend or host to after church (nothing against brunch. I love brunch). This herstoric version of Mother’s Day calls for us to gather to figure out how to “live in peace” as the “sacred impress, not of Caesar, but of God.” An impress is a mark made by a seal or a stamp. Think of an imprint. So Howe is calling us to live not as imprints of Caesar, of the embodiment of imperial power, but as “sacred imprints of God.”

I think this is what Jesus is asking of us too in our scripture today. Jesus is telling us, in his own language, that his life is a sacred imprint of God’s way in the world.

“The words that I say to you I do not speak on my own; but the Mother who dwells in me does her works. Believe me that I am in the Mother and the Mother is in me.”

But not only is Jesus’ life a sacred imprint of God, ours can be too. These are not just pretty, poetic words. They are a practice, a way of being in the world of seeing and listening to and experiencing ourselves and each other as particular, gorgeous and sacred imprints of God interconnected.

I had a professor in seminary, Rev. Dr. Hal Taussig, who taught biblical studies and was also one of the most loving people I have ever met. My friends and I called him the nugget. He was brilliant, and also not afraid of his own soft center. One of his regular spiritual practices was rooted in this scripture from John. He would practice it on the subway to work the seminary in NYC. How many of you have been on the subway in NYC at rush hour? It is a crush of humanity. You just pretend that stranger next to you isn’t smashed into you. You pretend the smell of last night’s beer or worse isn’t linger in the seats. You carve out mental space with headphones because there is no physical space.

“Let us then solemnly take counsel with each other as to the means whereby the great human family can live in peace, each learning after her own time, the sacred impress, not of Caesar, but of God.”