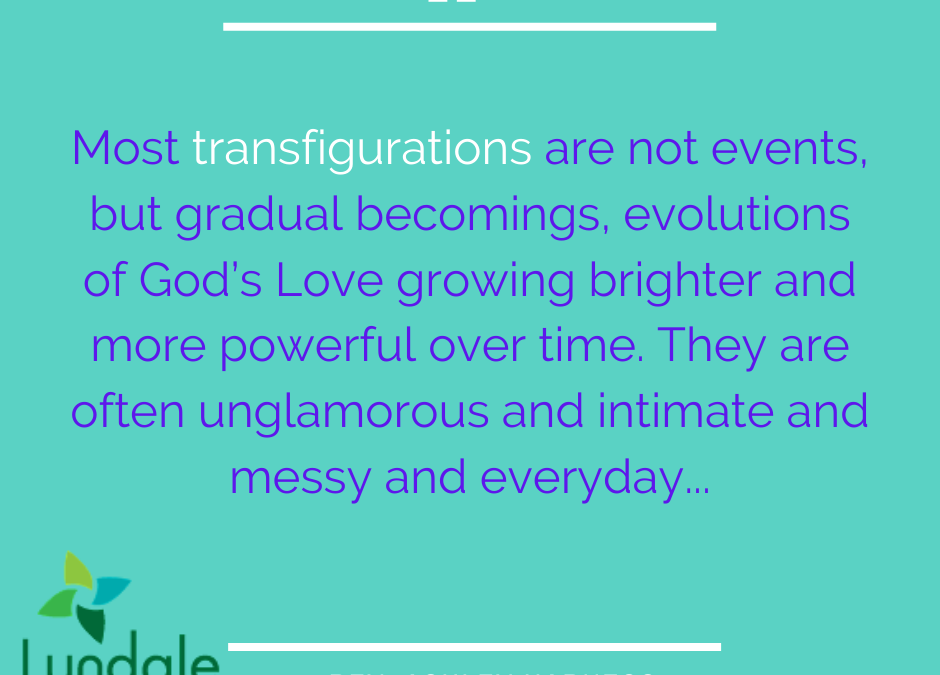 Much of the church year these days gets boiled down to Christmas and Easter, birth and death, life and New Life. But personally, I’m a transfiguration Christian more than anything else. Don’t get me wrong, I love Christmas. My kids ask to listen to Christmas carols all year and I cheerfully oblige. As soon as the cold starts to creep into fall, I’m all in for the season. And Easter? I mean, it’s like Christianity’s biggest hit – the breakout song on the album. Resurrection, spring, thawing our spirits, lilies, babies in ruffles and drag queens in Easter bonnets (yes, I realize that last one might have just been my little queer church as a kid, but it’s a standout memory). Transfiguration is more like the third track on the album, for those of you who remember such things, nestled in there so comfortably you could miss it. But it’s the one that really is the thread that connects all the tracks, the theme that unfolds across it all. How many metaphors can I throw at you?

I’m a transfiguration Christian. Let me tell you what that means. Sometimes transfiguration is an event. Like in our scripture story today. The Divine reveals their magnificent incarnation in a way that changes the way we understand ourselves or another being or even a whole group of people and it all just clicks into place to dazzle us (and maybe scare us a bit too, sometimes).

Bishop Desmond Tutu told the story of his first time voting in his homeland of South Africa post-Apartheid and hundreds of years of colonization as this kind of story of transfiguration. He was 63 years old. This is how he describes his experience:

“It was an incredible experience. For you [Americans today], going to the ballot box is really a political act. For us [Black South Africans], it was a religious act. It was a spiritual experience, because you walked into the polling booth one person, with all of the history of oppression and injustice, and all the baggage that we were carrying. And you walk, and you make your mark, and you put the ballot into the box, and you emerge on the other side. And you are a different person: you are transfigured. Now you actually count in your own country. Hey, I mean, it really was a cloud nine experience. We were transformed from ciphers into persons.”

Amen. Have you had that kind of moment yourself? Or witnessed it in another? A mountaintop experience or a cloud nine experience where God is just a show-off of beauty and radiant transformation?

I’m think about when marriage became an option for LGBTQ folks in Minnesota. I know Lyndale played a big role in that movement. The moment when marriage equality finally passed and the first weddings for queer folks after that were glorious moments of transfiguration, of revelation AND recognition of Love, capital L, here and now.

It doesn’t have to be a political watershed moment, though. I think of weddings and baptisms and funerals – public moments in which we recognize glorious Love – both human and Divine – revealing itself to us. Each of the times I have been honored to officiate for one of you in this capacity is a blessing that will live on in me long past the time I have served at Lyndale as a pastor. Thank you.

Have you read the story of the Velveteen Rabbit? This scene from that classic children’s book illustrates the kind of cumulative transfiguration I’m trying to talk about:

“The Skin Horse had lived longer in the nursery than any of the others. He was so old that his brown coat was bald in patches and showed the seams underneath, and most of the hairs in his tail had been pulled out to string bead necklaces. He was wise, for he had seen a long succession of mechanical toys arrive to boast and swagger, and by-and-by break their mainsprings and pass away, and he knew that they were only toys, and would never turn into anything else. For nursery magic is very strange and wonderful, and only those playthings that are old and wise and experienced like the Skin Horse understand all about it.

“What is REAL?” asked the Rabbit one day, when they were lying side by side near the nursery fender, before Nana came to tidy the room. “Does it mean having things that buzz inside you and a stick-out handle?”

“Real isn’t how you are made,” said the Skin Horse. “It’s a thing that happens to you. When a child loves you for a long, long time, not just to play with, but REALLY loves you, then you become Real.”

“Does it hurt?” asked the Rabbit.

“Sometimes,” said the Skin Horse, for he was always truthful. “When you are Real you don’t mind being hurt.”

“Does it happen all at once, like being wound up,” he asked, “or bit by bit?”

“It doesn’t happen all at once,” said the Skin Horse. “You become. It takes a long time. That’s why it doesn’t happen often to people who break easily, or have sharp edges, or who have to be carefully kept. Generally, by the time you are Real, most of your hair has been loved off, and your eyes drop out and you get loose in the joints and very shabby. But these things don’t matter at all, because once you are Real you can’t be ugly, except to people who don’t understand.”

“The Boy’s Uncle made me Real,” he said. “That was a great many years ago; but once you are Real you can’t become unreal again. It lasts for always.”[1]

Bearing witness to everyday moments of “becoming real” in myself and in each other and in community is transfiguration Christianity. This is the reason I’m a pastor. And it’s the hardest part about saying goodbye to you all as I transition out of Lyndale over these next months. The greatest honor of the last 8 years of ministering with you has been accompanying you individually and collectively in this kind of becoming.

Most of the stories of this kind of becoming are confidential. They belong not to me, but to you. But they were moments when you revealed the realness of who you are, when you manifested God’s Love, and I had the honor of recognizing that divinity in you and – if I did my job right – holding a mirror up so you could see it too.

Beloveds, I’m a transfiguration Christian, daily seeking to be dazzled by the glories of the mundane. Thank you for letting me accompany your transfigurations and be awed like Peter. Thank you for the honor of bearing witness to your realness, to your divinity. We have some months ahead of transition time as I pass the baton, download tons of information and prepare to depart. I hope that I can spend a bit of time with as many of you as would find that meaningful – reflecting back to you one more time the way I see that divinity made real, powerful and fabulous in you. It would be my honor. And then I will head back down the mountain, not to do anything as biblically grand as healing others like Jesus, but just to what I hope will be the transfiguring task, the real-making process, of my own healing.