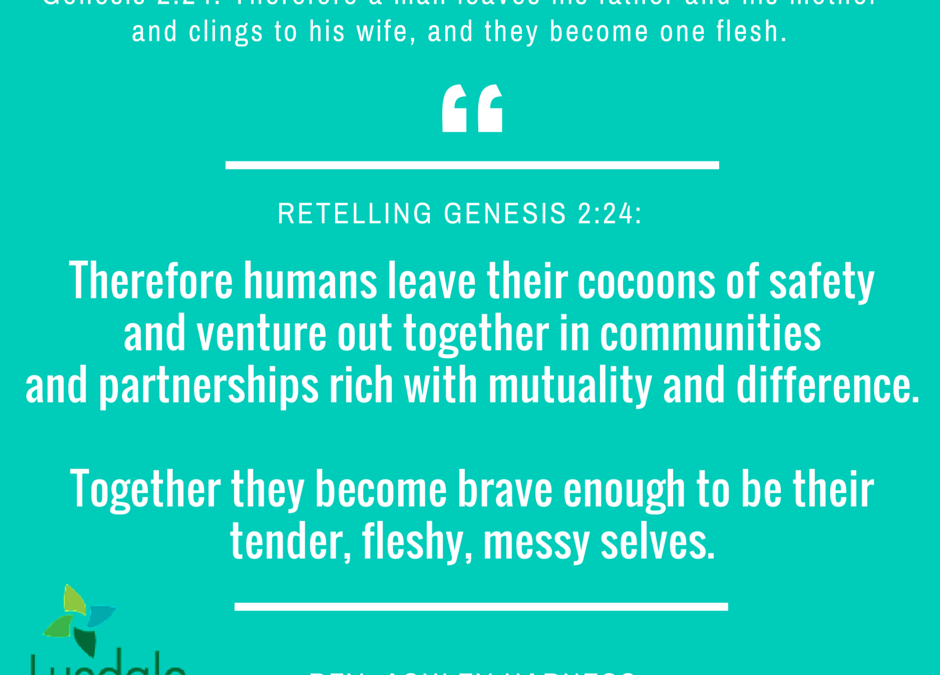 When I went to look at the lectionary this week, the prescribed texts for Protestants around the world, I said something aloud I’m not supposed to say from the pulpit. It was profane. And imagine that when I read the text aloud here, you might have the same reaction. So I’m going to read it, and then I’m going to ask you to just sit in silence for a moment with all that it stirs up in you. And then I promise I won’t leave you there.

Then God said, ‘It is not good that the man should be alone; I will make him a helper as his partner.’ So out of the ground God formed every animal of the field and every bird of the air, and brought them to the man to see what he would call them; and whatever the man called each living creature, that was its name. The man gave names to all cattle, and to the birds of the air, and to every animal of the field; but for the man there was not found a helper as his partner. So God caused a deep sleep to fall upon the man, and he slept; then God took one of his ribs and closed up its place with flesh. And the rib God had taken from the man, God made into a woman and brought her to the man. Then the man said,
‘This at last is bone of my bones
and flesh of my flesh;
this one shall be called Woman,
for out of Man this one was taken.’
Therefore a man leaves his father and his mother and clings to his wife, and they become one flesh.

As a queer female pastor, there are so many layers of this text that make me angry. It’s a text that has been used to keep women subservient to men, men claiming that women were made from their image as a creation afterthought of sorts. It’s a text that has been mocked by fervent anti-gay preachers as proof that God created Adam and Eve and not Adam and Steve. It’s a text that reinforces the gender binaries that have hurt so many transgender and genderqueer folks. I thought about just not preaching on the lectionary texts this week because this text makes me so mad. But you know, it’s the texts that make us mad that are as important as the texts we love. They have power that we need to address in our culture and in our own lives.

So let me tell you instead what this text can be. It can be a story of incarnational R-E-S-P-E-C-T, as Aretha would say, and profound mutuality, if we reclaim it. In the early 1970s, this is exactly what feminist theologian and biblical scholar Phyllis Trible did. She was sick of male biblical interpreters reinforcing patriarchal politics via this text. And she was also sick of feminists abdicating the power of the bible to support their own spiritual well-being and their struggle for justice. She wrote an article that I think should be required reading for all Christians.[1]

In that article, Trible first refutes the argument that the creation of women last means women are somehow less-than men. She follows the logic of this genre of biblical text that the “last shall be first” and insists that women are not the afterthought, but rather the culmination, the pinnacle of creation. I think this is excellent academic cheekiness.

And then she dives into some seriously nerdy Hebrew word studies that I ask your patience as I relay. Sometimes a little nerdiness goes a long way toward liberation. First of all, let’s talk about this whole translation of the Hebrew word, ‘adham’ to man, as in “it is not good for man to be alone.” Trible is quick to point out that the actual Hebrew word used here a generic term for humankind that is not specifically male-gendered. She uses the word ‘androgynous’ to describe this original human being, but I would update that to something like omni-gendered, multi-gendered, or even genderqueer.

So the prequel to this story of Genesis is that God has breathed life into the earth, into the dirt, to create this omni-queer-multi-gendered being. And then in our story for this morning, God decides this being needs a helper. In our modern world, a helper connotes words like an assistant, somebody subservient. But Trible looks at the root Hebrew word of helper, “neged-ezer,” as it is used throughout the Hebrew bible and finds it is used to describe mutual relationships of equal respect. In this passage, God has realized that this human being needs that kind of relationship, a companion relationship.

So God takes this omni-queer-multi-gendered human being and makes a companion. Instead of breathing into the dirt – God’s favorite recipe for creating new creatures – one part breath, one part dirt – God takes a rib, and breathes new life into it to create another human. As Trible says of the result, “The two are neither dichotomies nor duplicates” of each other. Instead, they are embodiments of each other, flesh of each other’s flesh, bone of each other’s bone. But they are also distinct from each other, created separately. Those of you who have engineer brains might like to imagine a Venn Diagram of overlapping circles. But do your darndest not to gender those circles male and female and let them be whole as simply human and human instead. And then you have a picture of our origin story of human relationship. In the language of Trible, we are made for and in relationships of mutuality, equality, and difference.

Finally there is this nagging heteronormative language of the last sentence, “Therefore a man leaves his father and his mother and clings to his wife, and they become one flesh.” In our culture we emphasize the gendered language here. But what if we took that out and instead focused on the underlying elements of this sentence, the ingredients of difference, mutuality and their embodiment in fleshiness. Flesh is a weird word. And it is remarkably common in the Bible – both Hebrew and Christian scriptures. In the context of our scripture, scholars talk about these words of bone and flesh as rudimentary language trying to describe the biology of humans that was understood only as hard and soft substances. Flesh is the soft substance. It fragile and tender.

What I think this last sentence is really saying is that in relationships of mutuality that also honor real difference, we can have the courage to be fleshy – soft, fragile, tender. And this is the state in which we are both most vulnerable and most ripe for love and transformation. In the book of Ezekiel (36:26), God creates from hearts of stone, hearts of flesh. These are open, tender, loving hearts.

So let me try translating and telling this text anew for us:

Then our Creator said, ‘It is not good that this omni-multi -queer-gendered human should be alone; I will make them a companion as an equal partner.’ So into the dirty ground of being and earth the Holy breathed and formed every animal of the field and every bird of the air, but for the human there was not found a true partner. So the Creator caused a deep sleep to fall upon the human; then the Creator took one of the human’s ribs and closed up its place with soft flesh. And the rib that the Creator had taken from the human, God made into the perfect embodiment of difference and mutuality and brought this fellow human to the other human who said,

‘This at last is bone of my bones
and flesh of my flesh;
this one shall be called my equal, my partner, my balance.’
Therefore humans leave their cacoons of safety and venture out together in communities and partnerships rich with mutuality and difference, and together they become brave enough to be their tender, fleshy, messy selves.

Whew. Can we live with that? Can we be empowered by that to become more deeply human and more deeply connected with our fellow creatures and fellow humans? Because that is the point of religion. One of you sent me a photo this week of a church sign that said, “If you hate anyone because of your faith, you’re doing it wrong.” Maybe I could have just showed you that picture and not had to write a whole sermon, come to think of it.

But really. Living like we were created, simultaneously with real messy difference and still in mutuality, is so hard. We see the struggle all over the news, especially this week as we reel from another mass shooting. As Rabbi Sharon Brous of California puts it, “Comfortable or not, convenient or not, your pain is my problem, your destiny is my sacred responsibility. Gun violence in this country is more than a political problem; it’s a spiritual problem, an empathy gap.”

Why is it so hard to close that gap in our day-to-day lives?

Maybe we also have a tenderness gap. Tenderness is kind of an embodied form of empathy, no? If we are practicing tenderness with ourselves and each other, maybe it’s easier to remember that we are made for and from mutuality across our differences.

This is all really heady stuff. So let me try to make it concrete. Take a moment of silence again. And this time, let images and memories of tenderness flood your imagination. What do you see? What do you feel? What do you hear?

This morning is World Communion Sunday. It’s the Sunday every year when we remember and honor both the mutuality and difference among Christians across the globe. But we don’t just talk about it. We all celebrate holy communion this Sunday. We eat the bread and drink the grape juice to remind our bodies and not just our minds that we are all a part of the Body of Christ.

There’s a reason one of the central metaphors of Christianity is the Body of Christ and not the Mind of Christ. We are messily fleshy, embodied creatures, as our story from Genesis reminds us. We can dream of empathy all day long, but we need the physical tool of tenderness to make it real. And we need communities and partnerships in which to practice. It’s a whole lot easier to practice tenderness with people we already love than with people who scare us. So as we move into communion this morning, let it be a reminder of your own tenderness, of the tenderness of Jesus’ ministry, of the tenderness of the relationships in your life are full of mutuality and respect, of the tenderness embodied in this beautiful community. Then we might be emboldened to bring that tenderness back out into the world.