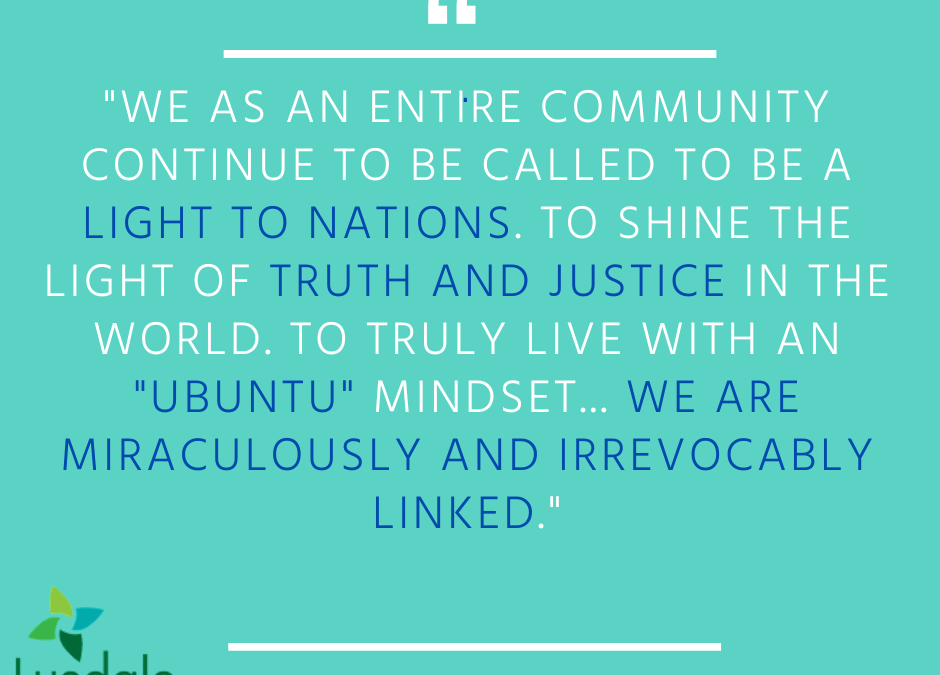 In August 2018, the Minnesota Chorale and Minnesota Orchestra traveled to Soweto, South Africa. At the Regina Mundi church – the place where black South Africans organized and planned uprisings against the apartheid regime – the choir filed onto the steps alongside singers from Johannesburg and Cape Town, the Guateng Choristers and 29:11. The communion table that was behind us was still broken from when police chased people seeking refuge from their violence into the worship space and slammed them into the altar, leaving it cracked and broken. Bullet holes still pierced the artwork in the sanctuary. But as we sang “Freude, schöner Götterfunken, Tochter aus Elysium, Wir betreten feuertrunken, Himmlische, dein Heiligtum!” a huge portrait of Nelson Mandela with his fist raised in power and in hope gazed at us from back of the balcony. People from the township were dancing in the aisles as we sang our song about joy and hope and connectedness. It was a true juxtaposition of the scars of the past with the hope of the future.

Isaiah, the prophet whom we encounter today, was in just such a juxtaposition himself. The scars of the past were quite prominent in Israel’s present situation. The passage we read today is from the second section of the book of Isaiah when the author wrote to a Jewish people in exile. The prophet Isaiah warned in the first part of the book that unethical leadership practices among the elite Jewish community would lead to consequences. And Isaiah was right – the Assyrians invaded Israel and Judah and the Jewish people were exiled. They were forced to live outside their homeland for generations. Instead of being a united community that worshiped together in their temple, the nation of Israel was estranged from the place that reminded them who they were and separated from each other.

Back in South Africa, in 1886, clay suitable for lucrative brick making and gold for mining were discovered near Johannesburg. With the new opportunities for work and resources, over 100,000 people of all nationalities flocked to the city. But the South African Republic government, controlled by Dutch colonialists, wanted to separate the white working class from anyone of color. In the 1930s, what would come to be called Soweto (a portmanteau of South West Territory) was created by the white government, forcing Black people to move to this supposedly temporary placement. Soon after, in 1948, the National Party won the election and their policy of apartheid, or separateness, was in full effect. Instead of being seen in their full identity as Zulu or Xhosa or Swazi or Venda, people of color were simply labeled as “Black,” forced to leave their home neighborhoods and communities and identities, and exiled to shanty towns at the edge of the city.

In middle of the Israel’s exile, we hear a glimmer of hope. The author of this part of Isaiah said “Listen to me! What we are doing is right! YHWH is looking out for us, and we will be able to go home someday.” Words of peace and comfort were the message for this scattered people. The passage of scripture we read today is considered a servant song. In the history of its interpretation, it was often thought that the “servant” called in this passage was one particular person. Christians have often claimed that one particular person to be Jesus. Newer scholarship, however, interprets this call to be directed at the entire community. A shared responsibility of the nation of Israel to be Servants to YHWH.

In the 1970s, the community of students in Soweto used their voices, sharp as arrows, to speak out against being forced to use Afrikaans in school – the language of the white oppressors, instead of their own native languages. Between 10,000 and 20,000 students joined together in protest by refusing to go to school and rallied on June 16, 1976. “Listen to me, O coastlands, pay attention, you peoples from far away! The LORD called me before I was born, while I was in my mother’s womb he named me. He made my mouth like a sharp sword, in the shadow of his hand he hid me; he made me a polished arrow, in his quiver he hid me away. And he said to me, “You are my servant, Israel, in whom I will be glorified.”” The students walked from their schools to the local stadium for a rally, supported by their teachers and other Black Consciousness Movement leaders. When they were met with a police barricade, they went by another route, singing and waving signs.

But the police set their dogs on the protestors and began shooting directly at the children. 15-year-old Hasting Ndlovu and 12-year-old Hector Pieterson were killed, along with 170 other people that day. Armored vehicles, helicopters, automatic rifles, stun guns, and carbines infiltrated the streets of the township.

But I said, “I have labored in vain, I have spent my strength for nothing and vanity; yet surely my cause is with the LORD, and my reward with my God.”

When children die, when children are murdered by police, it can be difficult to believe that our words and actions are those that God called us, because where is God in this?

This is where the reminder from the prophet is needed the most. In this horror. In this moment that feels impossible to get through. Our cause is with YHWH. Our reward – that thing we’ve been hoping for. That joy we’ve been seeking. That sense of home we’ve missed – God is in that and has been with us since we were formed.

The images of this uprising, of Hector Pieterson being carried to the hospital, led to a shift in how apartheid rule was viewed around the world. It became more uncomfortable for major world leaders to sit idly by. The UN Security council strongly condemned the government following the massacre. The tide shifted toward change. “I will give you as a light to the nations, that my salvation may reach to the end of the earth.” Thus says the LORD, the Redeemer of Israel and his Holy One, to one deeply despised, abhorred by the nations, the slave of rulers, “Kings shall see and stand up, princes, and they shall prostrate themselves, because of the LORD, who is faithful, the Holy One of Israel, who has chosen you.”

The last section of the book of Isaiah is a collection of prophetic writings and teachings given after the people of Israel returned to their homeland. King Cyrus of Persia came into power and allowed the Jewish nation to return to their home and rebuild their temple. This happy ending, however, was punctuated with a return to some of the bad habits the community engaged in that the prophet warned against in the beginning of the book.

In 1994, Nelson Mandela became the first democratically elected leader in South Africa. He began the work of repair to decades of apartheid rule and centuries of colonialism through the Truth and Reconciliation Campaign. This happy ending, though, also had its flaws. Makhosazana K Nzimande, a Hebrew Bible scholar from Durban South Africa, notes that because South Africa still engages in late-stage capitalism and imperial wealth, unequal economic situations persist for Black people in South Africa. South African women, in particular, bear the brunt as many men continue to be incarcerated or forced into migratory labor systems as gold and diamond miners, railroad workers, and other jobs such as these. Nzimande writes:

“The new spatial positioning of South African women’s agency is a space of anticipation, an in between space between the dusk of a politically oppressive regime and the dawn of social and economic justice…. Politically, black South Africans have left Babylon, crossed over the Jordan, and returned to Zion… Yet this spatial positioning is a liminal “postexilic” space that has placed black South Africans in a perpetual socioeconomic limbo… Under neocolonialism and globalization, black South Africans are the “Suffering Servants” who constantly seek to remove the Babylonian hegemonic yoke while others benefit tremendously from it… As “Suffering Servants” groaning under the yoke of Western neoimperialism, globalization, and socioeconomic exploitation, black South African women eagerly await the new exodus-conquest whereby Babylon will be destroyed.”

Although those in exile have made it back home, there is still work to do. There are still systems of oppression and hate and violence well intact. Not just in Soweto but in our own hometowns too. We as an entire community continue to be called to be a light to nations. To shine the light of truth and justice in the world. To use our words sharp as arrows to speak to the kings and princes of the world. To truly live with an “ubuntu” mindset – the South African phrase that tell us that “I am because we are” – I cannot exist without the love and existence of my community. We are miraculously and irrevocably linked. That same sentiment was sung at Regina Mundi church in 2018 – the German poem in Beethoven’s 9th symphony translates to “Joyful! Joyful! Thy magic binds again what custom strictly divided – All people become siblings, where thy gentle wing abides. Joyful Joyful.” May it be so.