Interdependence is a Muscle* 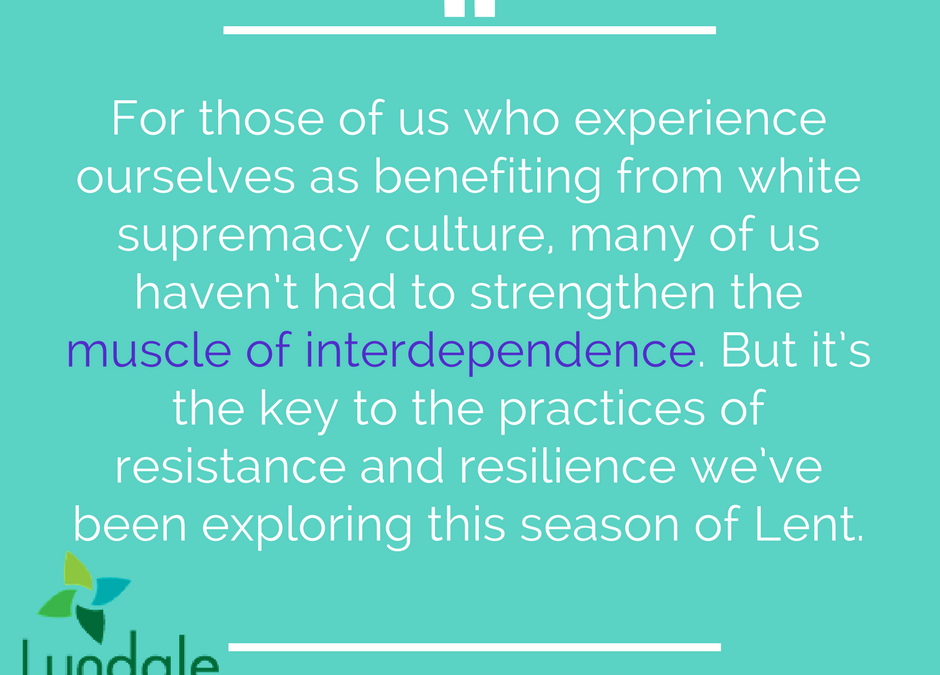 As many of you know, our beloved member Kayla fell last week. She was physically fine, but emotionally worn down from almost 60 years of falling caused by her cerebral palsy. When I called her to check in on how she was doing she, of course, offered me as much if not more than I did her. This is the dirty secret of ministry. When we listen with our full beings, we are often the recipient of great wisdom and not the givers of such wisdom.

I told Kayla I was preaching on Ezekiel and the dry bones this week. And she sighed a deep Kayla sigh and said, “ohhhhhh I love that story.” “Me too,” I said, “Why do you love it?” And she offered this gem, “Because I learned how to fall before I could walk. Falling has never been the scary part for me. It’s the getting up. That’s the hard part. And this story is about the hard work of getting up.” “That’ll preach,” I responded. And I asked her if I could preach on her wisdom. She agreed. May I do her tremendous wisdom justice…

When Kayla was three years old, a trusted grown up took her to a room full of mats and taught her how to fall. The idea was that she was going to do a lot of falling in her life living with cerebral palsy, so she needed to know how not to hurt herself before she started walking. So said grown up taught her to relax all her muscles and become a ragdoll. When she wasn’t resisting, she could tumble down on those mats without a bump or bruise. Said grown-up “threw her around” until she could fall well. And only then was she allowed to learn to walk.

As I listened, I realized I felt strangely jealous of that training. In my 30s, I’m still pretty actively learning to fall well. As an able-bodied, middle-class, Christian, American citizen, cis-gendered and perhaps most importantly, white person, I have absorbed the mainstream culture of success. I have swallowed the myth of my autonomy, the myth that I have a certain amount of deserved control over my world, the myth that if I do it all right, I actually won’t fall. If I do it all right, I will make progress, I will be comfortable, I will earn the abundance I need to feel safe. These are some of the myths white supremacy culture teaches us in this country. We’ve been talking about these myths in our months studying the United Church of Christ’s White Privilege Curriculum that we are wrapping up today and over the next couple weeks.

The problem is that these myths ultimately lead us to topple over with no practice. And not only that, they lead us to push others over. And we find ourselves in despair and exile from the truth of interconnection and interdependence with God and each other. These bones Ezekiel encounters represent that despair and exile. As one commentator says:

“Ezekiel’s vision is given for a people who have lost heart, who are suffering a death of the spirit, a living death in exile in a foreign land. Their temple has been destroyed, their holy city plundered, their leaders maimed and put in chains, their soldiers put to the sword, their young men and women either killed or dragged off into a foreign land. Ezekiel witnesses the soul of his people gradually wither and die, become lifeless as a valley of dry bones.”[1]

Those of us gathered at Lyndale are a people who have, since November 9,th 2016, often felt a loss of heart, suffered a death of the ideals we thought were shared in our country and started to feel like we are living in a foreign land. What is this land where racism is no longer hidden from white eyes and generally forbidden in public discourse, but instead embodied by some of the most powerful leaders of the land? What is the country where the commander in chief is also the womanizer in chief? I could go on, but I don’t have time for the full list. We have fallen. And we have no idea how to get back up. We haven’t had to learn those skills collectively.

But this is the thing. We in this room who are white liberals feel in exile. But nobody has actually destroyed our temples or actually plundered our cities. Our leaders have not been killed off. Our young people are not the ones being sent overseas to fight imperial wars, for the most part. Nope. Those burdens have largely been carried by people of color and indigenous people and religious minorities and working class people in our country for centuries. And now we white liberals are being forced into an ideological despair and exile that is stretching us and giving us a choice. Will we learn from those communities the lessons of resistance and resilience we too need? Or will the soul of our people gradually wither and die, become lifeless as a valley of dry bones?

As my Jewish friend Liz Loeb teaches, “Interdependence is a muscle.” For those of us who experience ourselves as living with the benefits of white supremacy culture, many of us haven’t had to strengthen that muscle. But it’s the key to the practices of resistance and resilience we’ve been exploring this season of Lent and to this sacred text.

My breath crumples inside me when I hear her say this. First of all, she’s nailed me and my phone addiction. Second, I picture her crawling, mustering the strength of her rattling bones, drawing sinew and blood and flesh and skin into alignment and strength so she can crawl the distance from bathroom to bedroom. But still, she remains stuck on the ground. “Then I need connection,” she says. “I can’t get up without it.” So she picks up the phone to call some community to her side.

“Connection,” I repeat. “Connection is the breath of God in the Ezekiel story. It’s what’s missing even after the bones become enfleshed and embodied. Until they feel God’s breath, God’s Spirit, they cannot rise.”

It took just one morning almost 60 years ago for Kayla to learn to fall in a room full of mats. Her body falls without pain because she has learned, at least in moments of crisis, to let go of control and relax into the falling. But learning to get up, to connect, that has to happen each time she falls. It’s an exercise of interdependence strength-building, of listening for her own breath to hear God’s breath blow through her, of trusting that that same Spirit Ezekiel trusted will also lift her out of despair and help her rise again.

“Choosing connection is the hard part,” Kayla sighs into the phone with me. “But once I choose it, getting up just happens. They lift me.”