Fermenting the Realm of God 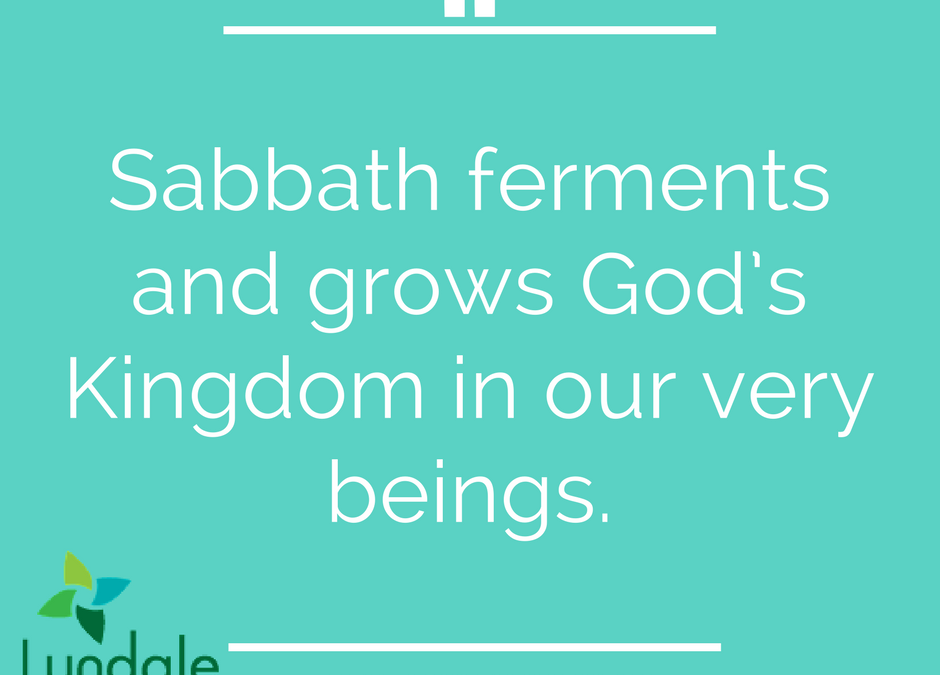 I want you to imagine yourself by your favorite lake. In fact, just move all of us gathered here at Lyndale in your mind to your favorite lake. Because when we meet Jesus today, he’s teaching his disciples, his spiritual students, by the Sea of Galilee. Maybe Lake Superior would be a good image for us Minnesotans.

Anyway, Jesus is teaching them about this thing that seems vexingly confusing to them, the Kingdom of Heaven, or what we often call the Realm of God. Remember, he may be at a lakeside, but Jesus is still surrounded by the Roman Empire. He’s in the middle of an empire where the emperor Caesar talks about himself as a son of the Gods. He’s in the middle of a political landscape where the government understands itself to be run by a God-figure. Are you getting it now? Empire of God. Kingdom of God. Kingdom of Heaven. The words are meant to be the same because what Jesus is explaining is not just about a world to come, some far off heaven in the sky like many of us have been taught, but about building a different kind of Kingdom here and now subverts the realm of the Emperor on the throne in Rome. It’s a political and spiritual revolution.

And this is why the disciples are confused. The Kingdom of Heaven, the Empire of God, they expect to look like the trappings of empire around them – big, royal, dripping in wealth, perhaps gold plated bathrooms – you get the gist. But this isn’t at ALL what Jesus is saying. Enter our parable, our spiritual teachings of Jesus for today:

[Jesus] put before them another parable: ‘The kingdom of heaven is like a mustard seed that someone took and sowed in his field; 32it is the smallest of all the seeds, but when it has grown it is the greatest of shrubs and becomes a tree, so that the birds of the air come and make nests in its branches.’

Let me translate for those of us who are not ancient farmers. Mustard seeds grew into huge tree-weeds. You didn’t plant them on purpose. They were just so darn tiny they wound up in and amidst your other seeds without you knowing and they sprouted up. One commentator called them an ancient “invasive species,” unpredictable, insistent, beyond our control. In modern speak, Jesus is essentially saying that God’s subversive Kingdom is as persistent and surprising and perhaps even annoying as an invasive weed in our midst.

Then, because they were still confused…

[Jesus] told them another parable: ‘The kingdom of heaven is like yeast that a woman took and mixed in with three measures of flour until all of it was leavened.’

Again, let’s translate here because none of us are ancient bakers. Personally, I buy yeast in a cute little, sealed packet at a grocery store. But yeast is actually a fungus, a bacteria that grows from death. In Jesus’ times, it was usually made by setting aside a piece of bread and allowing it to spoil, to mold. And the remnants of that death could be used as leaven, as yeast. In the ancient world without understanding of germs, this stuff would have been considered unclean, corrupt, disdained and even dangerous. And yet, as one commentator says, “God is fermenting the empire of the heavens within the world, like a woman who mixes or spoils flour with yeast.”[1]

These parables teach us that the kingdom of heaven, the realm of the divine here and now, persists in our midst even when we don’t want it to – like an invasive weed subverting our best laid plans. It grows out of what looks like death to nourish us.

What Jesus doesn’t say, and yet it’s embedded in these metaphors, is that the distance between the mustard seed and the giant tree-weed it turns into and the distance between the deathly mold of yeast and the nourishing bread is actually time. The mustard seeds must rest in the dark earth and grow for a time. The yeast needs time to make bread rise. So that means the political and spiritual revolution required to bring Realm of God into being requires time, holy time.

We have been talking about this holy time all summer. The human version of it is Sabbath practice, the day of rest mandated in the commandments. I think that Sabbath plays the same role as the holy time in our parables. Sabbath is what transforms the deathly mold of our daily lives into nourishing gift of risen bread. Sabbath ferments God’s kingdom in our beings. Sabbath is the darkness underground in which the seeds of mustard sprout so they can grow into glorious, though unplanned, trees of creaturely shelter.

I don’t know about you, but my Sabbath practice, taking a real day of rest and recreation – “REcreation”- has not come so easily. So I’m going to offer you a tool to practice in smaller doses – 10 to 20 minutes – that holy rest. It’s a form of meditation or prayer that grows out of monastic practices that are over a thousand years old. This particular version is called centering prayer and it was brought into popularity in the 1970s by the Trappist monk, Thomas Keating.

Keating says this kind of prayer “is the opening of mind and heart – our whole being – to God, the Ultimate Mystery , beyond thoughts, words, and emotions. We open our awareness to God whom we know by faith is within us, closer than breathing, closer than thinking, closer than choosing – closer than consciousness itself.” 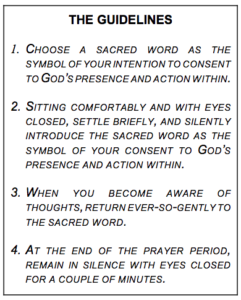