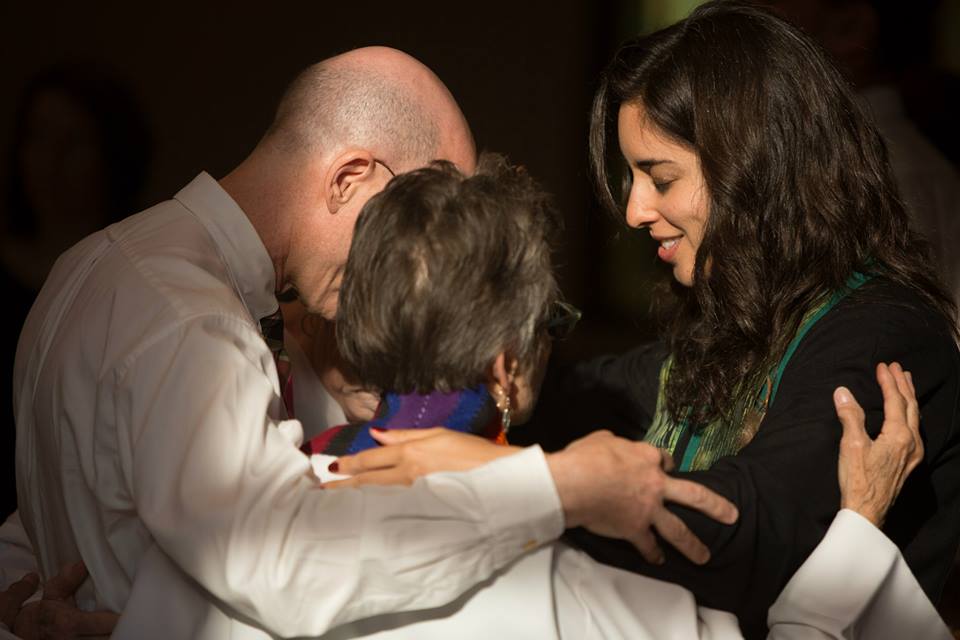 First of all, we just need to have a moment for this stellar example of “biblical marriage.” Two wives, two maids available to Jacob like ancient call girls, no problem! I’m just saying, let’s remember what Biblical marriage is really all about.

Moving on…  I love this scripture. It’s one of those beautiful and juicy ones. It’s also kind of a terrifying scripture to preach on. I mean, it’s so famous, so beloved, that it’s almost off limits.  So last week I started digging into what other people, namely some well-respected, older theologian guys, had preached about it.

There were some themes that emerged that I will categorize this way: A) Theological sports commentary: This was a strain of analysis focused on the tactical blow-by-blow and obsessed with the question of who won the wrestling match. And B) What I’ll call the taxonomy of God and divine figures debate: Is this mysterious figure Jacob meets an Angel? A demon? A “man with divine attributes”? That’s what one commentary called it, as though making some kind of scientific point about levels of God concentrate in this figure. Finally C) The, “is it supposed to be real,” line of questions: Is this a dream sequence, an analogy for Jacob’s psychological wrestling, or supposedly a real encounter in the physical world?

Frankly, none of these lines of questioning are very interesting to me. Though that last one does remind me of one of my favorite lines from the Harry Potter series. When Harry’s soul lingers in the space between death and life after he has faced Voldermort in the last book, he meets the spirit of Dumbledore. Harry asks Dumbledore if the conversation they are having is real or if it’s all happening in his head. Dumbledore responds, “Of course it is happening inside your head, Harry, but why on earth should that mean that it is not real?” For me, that answers that line of questioning quite well.

As for the other two themes – theological sports commentary and taxonomy of God – those reveal more, I think, about these particular theologian’s anxieties around power – both human and Divine – than about what the text really has to tell us about the relational encounter at the core of this story – the blessing. They seem more focused on making sense than making meaning of the text.

If only out of frustration, these commentaries did make me go back to some of my favorite meaning makers. Namely, I went back to a Catherine Keller book I love called, On the Mystery. The main point of hers that leaped out at me this time around was this: God’s power is not about control (something we can measure by who wins or and categorize by type). God’s power is the power of what she calls “persistent love.” Not saccharine, glossy Hallmark love. As Keller describes it, this love is “an unconditional radiance that embraces neighbor, stranger, or even enemy.” It lures us to notice our interdependence and implicates [us]… in the lives of others.[1] This is the Divine Power of Love that I think Jacob encounters in our story for today.

Let’s back up just a moment to remember Jacob’s context here. First, remember Jacob is not exactly Mr. Righteous. He stole his brother Esau’s birthright and blessing from their father, big deals in ancient times. This is kind of like finagling a way to steal your brother’s college fund and inheritance and future prospects for security and status in the world all at once. Note cute. Esau is furious. So Jacob’s mother sends Jacob to live with an uncle to avoid Esau’s rage and revenge.

Over the next 20 years, Jacob grows up. He turns his childhood trickster skills into adult workplace strengths, so to speak. He’s prosperous, as his two wives, two maids, and eleven children are meant to show us. So of course, this is when God decides it’s time for Jacob to go back to his homeland and face his past. On this journey, he will have to pass through the land where his estranged brother Esau lives, girded by wealth and an army. And he’s terrified about being rejected. I don’t mean emotionally rejected here. He’s afraid Esau’s people might kill him before he can even talk to Esau. The night before he will pass through Esau’s land is when we meet Jacob in our text for today.

Let’s read it again. But this time with some different translations of a few words and a new theological lens inflected with Catherine Keller and my own theology:  24Jacob was left alone; and the force of Love (capital L) wrestled with him until daybreak. 25When this glimmer of Love incarnate saw that Jacob could endure its presence, Love grew, persisting to reach Jacob where he was most vulnerable. 26Then the power of Love’s embrace had done its work and said, ‘Let me go, for the day is breaking.’ But Jacob said, ‘I will not let you go, unless you bless me.’ 27So Love paused and said to him, ‘What is your name?’ And he said, ‘Jacob, the one whose name means he grasps for what is not his.’28 Love responded, ‘Now you shall no longer be called Jacob, but Israel, the name for one who strives with Love and endures.’ 29Then Jacob asked, ‘Please tell me your name.’ And Love said, ‘Why is it that you try to grasp me still?’ And there Love blessed him. 30 So Jacob called the place Peniel which means ‘face of Love’ saying, ‘For I have seen Love face to face, and endured.’ 31The sun rose upon him as he left to meet Esau, forever moving more slowly because Love left a mark at his core.

What I love about this text, both the original and my translation, is how honest it is about real life blessings. Jacob says, “For I have seen Love (or God) face to face, and endured.” While I imagine Jacob awestruck and joyous, that word “endured” speaks pretty loudly. Another translation of that root word in Hebrew is “survived.” We don’t usually talk about “surviving” a blessing. But isn’t that so true sometimes? Just think about it for a moment.

I’m thinking of my grandmother, Flo. I certainly encountered the face of Love in her. But in the days around her funeral I didn’t feel like I was receiving a blessing. I didn’t have the language for it at the time, but in retrospect, I was surviving the blessing of her life. Radiant, real, persistent love can be as painful as it is precious. And isn’t that why we run away from encounters with Love, why we sometimes need Love to tackle us in the middle of the night and reach in for that place in us that is most vulnerable? Isn’t that why we get entangled in wrestling matches with Love, at times pulling it close, at times grasping, and at times pushing it away with all our might? But imagine, how many more blessings we might count if we could see each encounter with Love as a blessing, no matter the outcome, no matter if it is painful?

In Jacob’s case, he survives with a limp, forever marked to move more slowly. This is the opposite of what we associate with blessings. Instead of protection and health, God’s blessing here makes Jacob’s vulnerability visible. And yet, in that vulnerability he discovers a different kind of power.

When Jacob continues his journey to meet his brother, his enemy, in the next chapter of Genesis, he doesn’t go forward in attack mode or as a trickster. Even though his first glimpse of Esau is with him surrounded by 400 soldiers, he steps forward to greet him all alone and bows, not once but 7 times, like a dog rolling over to show his belly. To this, Esau responds with an embrace. And Jacob says to Esau, “to see your face is like seeing the face of God.” This is the tremendous power of God’s persistent love, “an unconditional radiance that embraces neighbor, stranger, or even enemy.”

This whole story summarizes why I need church, and ultimately why I chose to walk the path of ordination. Like those theologians I knocked at the beginning of this sermon, it’s easier for me to spend time in my head categorizing and measuring and making sense than it is for me to let go into a moment of encounter, of blessing. Church, on the other hand, can be a place where we practice encountering Love despite all the risk. Church, at its best, is where we learn to endure blessings. Church, if we make it so, is where we too can transform our vulnerability into the power we need to heal the world.  May we be that church, dearest Lyndale, for ourselves and for our world.