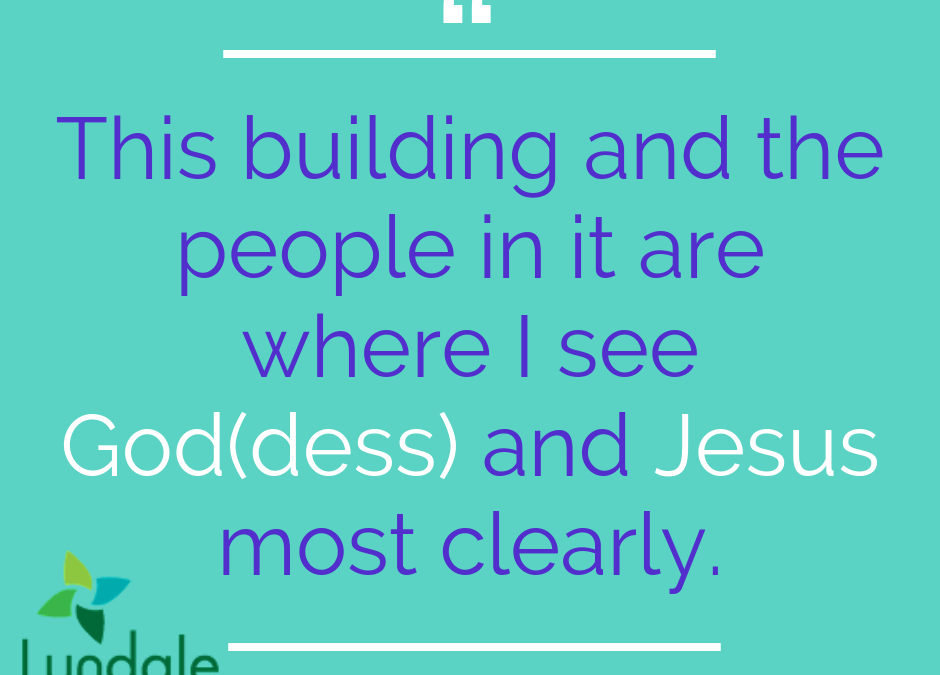 Hi, thanks for having me, some of you hopefully know me, I’m Emily Miller, I’m a senior at Washburn high school, I’m a member of this church, and am currently one of the oldest youth in Spring House’s youth group.

So, Matthew 28 verses 16-20… gotta say, not my favorite. When I did this initially for First, this was the one they had planned for that day, and despite my dislike for this piece of scripture, I was too lazy to write a whole new sermon, sorry. Regardless, this excerpt just doesn’t seem to represent the Jesus I believe in. It seems more like a supervillain when he or she would be like “All the power in the world has been given to me! Go! Make everyone believe in me and my beliefs and to obey everything I say!”…. “Muhahahaha!” Sounds like a bit of a manipulative man-splainer isn’t he? He even goes on to make the comment about how he’s always with us and is all Monster Inc. lady “watching, always watching”.

But anyways, I don’t really like this side of Jesus. It’s not the Jesus I’ve heard of that helps the sick and represents the outcasts, the one that supports and loves all, and the prophet whose main purpose is to spread light in the darkness and peace during chaos.  My point is that this Jesus doesn’t seem much like the Jesus we preach here at Spring House. We don’t believe in a dictator Jesus, we put our faith in the Jesus that stands up even when it’s hard and the whole world’s against him if it means doing the right thing and/or is on the path towards equality. Spring House embodies that Jesus. We open our doors and hearts to people of all religions, skin tones and sexuality. We try our best to provide a sanctuary for anyone who needs a community to support and love them for who they are, and not who others want them to be.

The Spring House community and everything that that entails has played a strong role in shaping who I am and still pushes me and everyone else to become an even better version of ourselves every week. It’s in a large part due to Spring House, and partially school, that I’ve developed many of my fundamental beliefs, primarily that everyone is entitled to an opinion, and no matter what it is, we should respect that, it only becomes destructive when people force their opinion on to others and have the desire to make the decisions in the lives of people that they don’t even know. Respect, freedom, and equality are at the core of our community and our actions.

(SLIDE) When we go out, we don’t go to force people to convert or take our opinions as their own, instead we go into the world with open minds and the intention of helping and learning from others. We discover for ourselves first hand what that place’s culture and people are like and try to make connections between our different communities. In this specific context, First Christian (you know, those other guys) has played a role in expanding my and many other Lyndalians’ horizons through trips to Paraguay, Detroit and Nicaragua where we got to interact and sometimes live with the locals while also seeing many of the sights and learn about the history of the country, city and individual families. I not only got closer to the residents of the places we visited, but also to those who accompanied me on those trips whether I was meeting them for the first time or had known them my whole life (Pam? Kathy? Anne?).

Switching gears real fast, having been part of Lyndale for basically ever, I’ve experienced a lot of changes. First we were moving buildings and sharing with Salem, then moved again and gained First, then Lyndale had Don retire and Ashley step in, drastically changing Lyndale in what I believe is for the better, especially since she brought in new people to fill our diminishing ranks lol.  Then there comes the turbulence of the change occurring within the youth group I’ve been a part of for so many years (like ssooo many, it was the only way for them to get Aviva and Yardena to join), that I can’t even count them all. In the time I’ve been there, we’ve had at least 5 youth ministers that range from being with us for 1 to 2 years, despite some thinking they’d be here for longer, and around 4 youth volunteers that were meant to stay consistent with the youth group despite changes within the leadership….. Am I a little salty? Probably more than a little. A small part of me can’t help but feel that it’s my fault that they leave since as I’ve said, I’m one of the oldest within the group and that comes with having had the most youth ministers…. Lucky me. However, despite this revolving door of trust and abandonment issues, the group as a whole has (for the most part) remained intact with the three churches rallying behind us in support. I care immensely for my fellow youth, (but don’t tell them I said that) and sometimes I fear that we may fall apart every time someone leaves, but I’ve been proven wrong time and time again by these people I’ve known since I was little and could not be more proud of who they’ve grown into and will continue to become. They are the future of Spring House and the world and can do anything with the support this assortment of congregations gives them.

That said, I’ve personally been the recipient of the undying love and support this community offers to all that walk through these doors, and I know that in whatever my future holds, I will always be able to come back and find a home at Spring House. You all have come together to support the other youth and I in our actions to change the world, be it fundraising and showing up to a climate march, transportation to D.C. to fight against those wishing to oppress women and many others, or by being a crutch and helping fight for respect for those who people see as different and unworthy. Together, Spring House and its congregations support and welcome people who our society has deemed as unwanted, whether they come from within or without, and we accept and respect them and act in the image of the God(dess) and Jesus and their message of loving thy neighbor as thyself.

In Spring House I can feel free to express my opinion. I like when I or one of the other youth is asked to do something as part of the church service, (though I know a few may prefer to stay in the shadows). And whether its one of the youth led worships or the Christmas pageant (I love it all personally) it’s exhilarating to be up in front of you guys and pretending like you aren’t sleeping through our hard work. It causes one to feel included and listened to, and maybe you guys are just really good actors, but you make us feel valued and like a part of this community (and I say that word a lot, but that’s what we are and there’s no better word to replace it with).  It’s a lot like in Corinthians 12 verses 12-27, “Just as a body, though one, has many parts, but all its many parts form one body, so it is with Christ. For we were all baptized by one Spirit so as to form one body—whether Jews or Gentiles, slave or free—and we were all given the one Spirit to drink. Even so the body is not made up of one part but of many. Now if the foot should say, “Because I am not a hand, I do not belong to the body,” it would not for that reason stop being part of the body. And if the ear should say, “Because I am not an eye, I do not belong to the body,” it would not for that reason stop being part of the body. If the whole body were an eye, where would the sense of hearing be? If the whole body were an ear, where would the sense of smell be? But in fact God has placed the parts in the body, every one of them, just as he wanted them to be. If they were all one part, where would the body be? As it is, there are many parts, but one body. The eye cannot say to the hand, “I don’t need you!” And the head cannot say to the feet, “I don’t need you!” On the contrary, those parts of the body that seem to be weaker are indispensable, and the parts that we think are less honorable we treat with special honor. And the parts that are unpresentable are treated with special modesty, while our presentable parts need no special treatment. But God has put the body together, giving greater honor to the parts that lacked it, so that there should be no division in the body, but that its parts should have equal concern for each other. If one part suffers, every part suffers with it; if one part is honored, every part rejoices with it. Now you are the body of Christ, and each one of you is a part of it.”……. (Sorry, had to read it to kill some time).

This building and the people in it are where I see God(dess) and Jesus most clearly. You guys provide strength when I have none but will still push me to new limits. Spring House will forever be a major part of my life and I am eternally indebted to you all. You provide me with a sense of hope that the sometimes crooked and misused Christian religion will become an outlet of love and justice instead of fear and anger. If we keep up the magnificent work, we’ll continue to cause positive change and be the light at the end of the tunnel for so many…… Thank you.