Dreams, Visitations and Other Epiphanic Interruptions 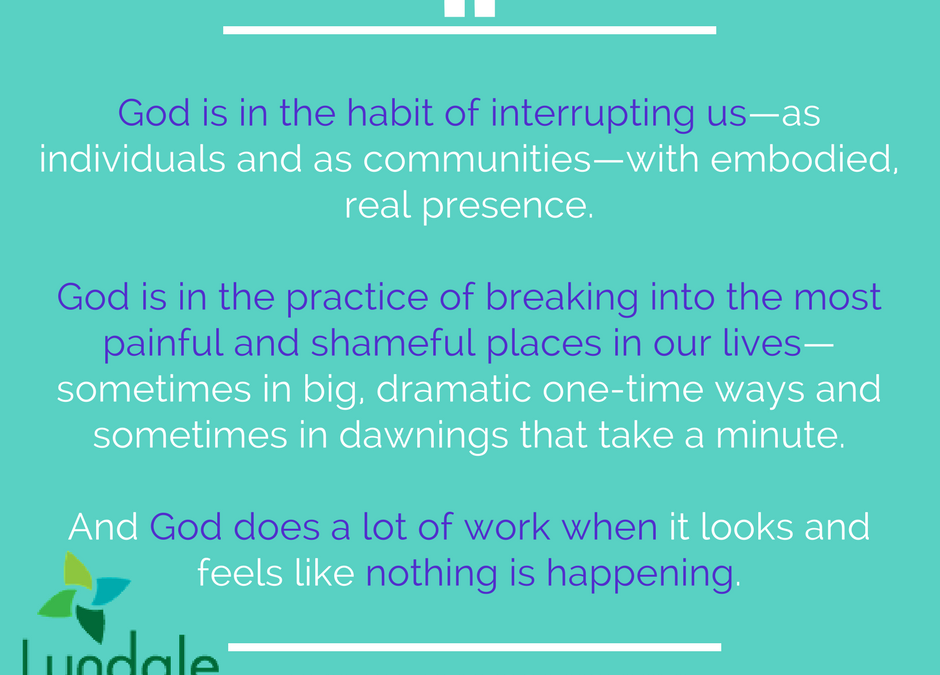 Bidden or unbidden, God comes. For this sacred presence, we return thanks. Amen.

She had been like a second mother to me. When, after college, I got on a train alone and moved to Seattle when I’d never been west of the Mississippi in my life, she had been one of the ones to catch me. I had lived in her basement for a year and she had invited me into her family. I knew her children and her husband, I’d spent countless meals talking about our shared work against domestic and sexual violence. Her laughter, her passion and her outrageous sense of humor were all contagious. As a Catholic woman who’d married a Protestant man, she’d had to get married in the church basement and that had given her a particular point of solidarity with queer people. She loved her lesbian daughter and she loved me and my activism.

So when Marie was in a car accident and she was mortally wounded, I was invited to keep vigil and sing over the three days it took her to die and I was invited to lead singing at her memorial service. While these were balms for my soul, I was still deeply grieving months after her death. It was like a weight that held me down everywhere I went. When I drove in my car anywhere, I would play Natalie Merchant’s Tigerlily album over and over and weep.

I was in this place of grief when I travelled to an Episcopal retreat center in Florida with my Sex and the Spirit working group. We were placed with roommates in a monastic cell-like room with scratchy sheets, thin bedspreads and bad air conditioning. But I still managed to fall into a deep sleep the first night. And that’s when it happened. I found myself sitting at Marie’s memorial service when, two rows in front of me, Marie turned around and started talking to me. Her mouth was filled to overflowing with those Brach’s caramel candies so her speech was a bit impeded, but she was grinning ear to ear.

“Oh, my God, this is fantastic!” She stood up and started dancing in her typical I’m-filled-with-joy way. “This is fabulous, you’re going to love it!”

And I was filled with such love and light and joy, I can still feel it more than 20 years later.

And then she was gone….

Our scripture reading for this morning shows three men known as wise ones who came from the East following a star to visit the infant Jesus.

In the time of King Herod, after Jesus was born in Bethlehem of Judea, wise men from the East came to Jerusalem, asking, “Where is the child who has been born king of the Jews? For we observed his star at its rising, and have come to pay him homage.”

I’ve always been very interested in these ones the text calls wise and their interaction with King Herod.

When King Herod heard this, he was frightened, and all Jerusalem with him; and calling together all the chief priests and scribes of the people, he inquired of them where the Messiah was to be born. They told him, “In Bethlehem of Judea; for so it has been written by the prophet: ‘And you, Bethlehem, in the land of Judah, are by no means least among the rulers of Judah; for from you shall come a ruler who is to shepherd my people Israel.’” Then Herod secretly called for the wise men and learned from them the exact time when the star had appeared. Then he sent them to Bethlehem, saying, “Go and search diligently for the child; and when you have found him, bring me word so that I may also go and pay him homage.”

There is a lot of research that suggests the wise ones were astronomers and interpreters of dreams from Persia which is present day Iran. It is likely that they were Zorastrians, an ancient religious tradition that is still alive today in Iran and India with followers all over the world. In any case, they were not Jews, but they were attentive, observant, aware. And their religious tradition taught, and still teaches, that the purpose of life is to renew the world… to make the world progress toward perfection. They were looking and listening and they saw a star which led them to journey, with costly gifts, likely at night so as to follow the star, through unknown and foreign lands. And when they finally get to the infant Jesus, they are filled with ecstatic joy and are compelled to worship.

When they saw that the star had stopped, they were overwhelmed with joy. On entering the house, they saw the child with Mary his mother; and they knelt down and paid him homage. Then, opening their treasure chests, they offered him gifts of gold, frankincense, and myrrh.

This stands in stark contrast to Herod. Our text says that he is scared by the possible threat to his power. And we know from Matthew 2:16 that after the wise ones pay attention to the dream they had and don’t go back to tell Herod where Jesus is, Herod orders the execution of all male Jewish children under the age of two.

When Herod saw that he had been tricked by the wise men, he was infuriated, and he sent and killed all the children in and around Bethlehem who were two years old or under, according to the time that he had learned from the wise men.

I find this Epiphany story an amazing end to our Christmas season. In much the same way that it is the shepherds and animals that are present at Jesus’ birth, so it is that foreigners are the ones who recognize Emmanuel, God born amongst and in us. It is the marginalized within society and those who are not part of the society who are awake enough to receive God’s Incarnation, God’s revelation, God’s epiphany. And it is those with power who seek to kill God born amongst us.

But what of us?

I have to be honest that I am struggling right now. I was sick earlier this week with an upper respiratory thing and didn’t get out of bed for three days. As I lay there, I had a lot of time to think and feel and I realize I am scared for our country and for our world. As I’ve talked with some of you this week, I don’t think I’m alone. I’m grieving that Empire Christianity seems to be holding sway, even as so many have worked for years and years to embody a religion of liberation and compassion. I am terrified for all of those who have been targeted with hate speech and violence both during the campaign cycle by Donald Trump and since and I can’t quite believe that that hatred, violence and lying have been elected to our presidency.

But our scripture for today, and our tradition of celebrating Epiphany, challenge my fear and grief.

God is in the habit of interrupting us—as individuals and as communities—with embodied, real presence. God is in the practice of breaking into the most painful and shameful places in our lives—sometimes in big, dramatic one-time ways and sometimes in dawnings that take a minute. And God does a lot of work when it looks and feels like nothing is happening.

So what of our lives?

What in-breaking of God’s presence do you and I need individually? As a community? As a country and world? How are we looking for the signs? How are we seeking to open ourselves to the visitation? How does our connection to the corruptive power of this world block us from hallowing the liberative power of God with us?

Less than a week after the election, I found myself at the same retreat center in Florida that I had had the dream of Marie almost exactly twenty years earlier. I was there for a meeting of twenty-five LGBTQ Protestant leaders, most of whom were people of color. As the facilitator of this meeting, originally meant to be a national strategizing meeting, I welcomed each person as they came in. One of the first to arrive was a man who works with LGBTQ people in Uganda. As he walked up, there were tears in his eyes… what would happen to those he worked with if the Trump State Department refused to grant asylum to LGBTQ folks? Who among those he loved would die because of this vote? I saw all of this in his tears and the hearts of most of us were similarly broken.

But then we were invited into worship to build an altar with the stories of who and whose we were and what gifts we bring. One African American lesbian shared a picture of her mother who had worked as a maid and proclaimed, “I am the promise of my ancestors’ dreams.” One white transman shared the doodle that he had started making years ago as he started his coming out process. He realized when he finally came out that the doodle was a transformed cross. “I am a beloved child of God.” It went on as each gave voice to the epiphanies of their lives and we, collectively created a moment in which God’s presence was enfleshed.

It didn’t change the reality in which we were living, but it blessed and called us to know and feel a deepness of joy that has the power to transform.

“Oh, my God, this is fantastic!” “This is fabulous, you’re going to love it!”