On Not Turning Into Communion Monsters 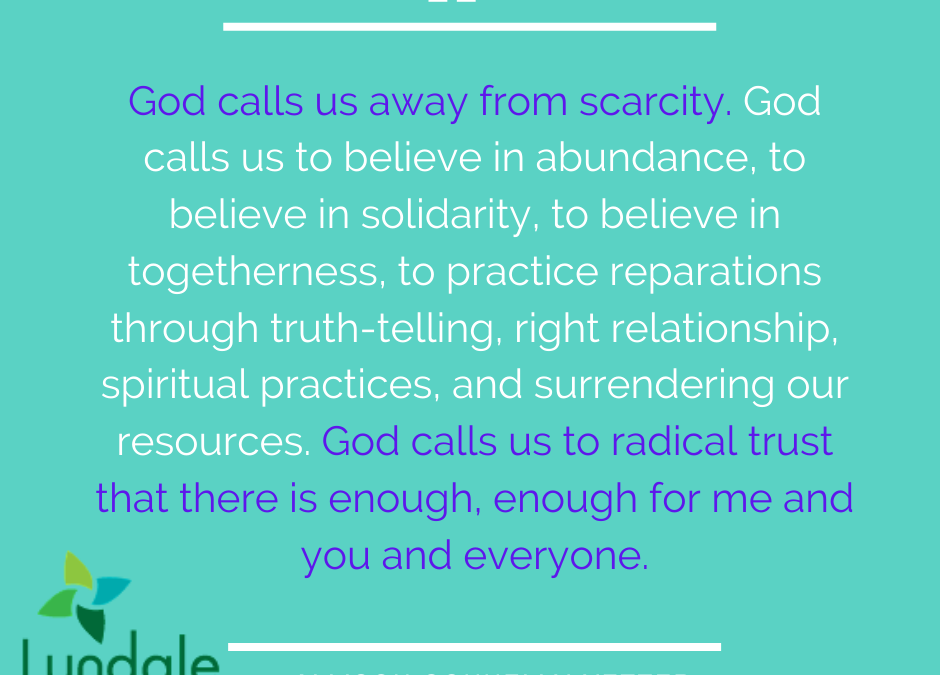 When I’m not here at Lyndale, I’m working as the Children, Youth, and Families Coordinator for Spirit of St. Stephen’s Catholic Community, a lay-led, non-canonical (does not answer to the Pope or Bishops), LGBTQ-inclusive catholic community here in Minneapolis. One of the absolute joys of that role these days is working with a group of four first through third graders who are preparing for their holy communion in May. These six to eight year olds are curious, energetic, and totally brilliant, and continuously surprise me with what they are thinking and wondering about. Last weekend was our first communion preparation gathering with these kiddos and their parents and it was a hoot! One of the stories from that gathering, in particular, resonates for me when I hear our scripture passage today.

I had been asking the kids what they knew about communion, and they all like coloring so I asked them to draw me a picture of communion or what communion meant for them. One of the kids, a six year old, drew a picture of a giant stick figure with two hands filled with gold. To his right were two smaller stick figures screaming (‘ahhhh”), a podium for the communion cup, and a stick figure labeled “Jesus” with a speech bubble saying “stop!” He explains his drawing to me: this guy (points to the giant stick figure) ate so much communion (hands filled with gold) that he turned into a communion monster! The other people in the communion line are running away and Jesus is stopping the monster.” Phew! A take on communion that I DEFINITELY did not anticipate. My response in the moment (moments that seminary did NOT prepare me for – there was no class on “communion monsters”) was something like “yes, Jesus does sometimes stop bad things happening” to which another kid immediately said “but not with weapons! Jesus doesn’t use weapons!” Which prompted a whole other entirely unplanned but really valuable conversation on nonviolence. Amazing. Who knew what communion drawings would bring up in the minds of these young children of God?

Thinking back on it, what I wish I’d thought to say in the moment was something about having “too much of a good thing,” or taking more than what is ours, or taking more than what we need, and not leaving enough for everybody. Our Scripture today tells the story of Jesus in the wilderness after his baptism, being harrassed by the Tempter (maybe the devil if you’re into that) after fasting for forty days. The Tempter offers Jesus food, power, and safety if Jesus turns away from God’s invitations and reminders. Jesus refuses these temptations, strong in his understanding of God’s way, and after Jesus resists the Tempter’s lies the Tempter leaves Jesus.

What’s standing out for me about this text this year is the blatant manufactured scarcity, or, in other words, the Tempter creating a fake environment in which there is not enough. In this text the Tempter creates and/or capitalizes on scenarios in which Jesus is hungry, powerless, and afraid. Without the Tempter’s antics and strategy, Jesus would be well-fed (would have returned from fasting in the desert), would have a strong community of friends and followers and a broad sphere of influence, and would be safe – as safe as any Jewish activist could be under Roman rule, which is in any case safer than standing on the tip of the Temple. Instead, the Tempter creates false reality in which Jesus’ resources – physical and spiritual – were artificially scarce and limited. But Jesus, instead of falling prey to the Tempter’s lies of scarcity, trusted in God’s abundance. Jesus believed that with God, there was enough, there would be enough, for him and for everybody.

Taking seriously my communion kiddo’s “communion monster” drawing – which, I do, because it was serious to this kid – I can see a similar theme. Taking communion itself is not bad – in fact, it’s good, and for some of us, like me, it feels even necessary. Communion nourishes us, spiritually and communally, and invites us to a more literal, more practical, more tangible understanding of our interconnectedness through the “body of Christ” in our communities and beyond. But, taking too much nourishment, too much food, taking more than we need, that’s when we become harmful, or dangerous, or, in this kid’s imagination, that’s when we become communion monsters. That’s when people become afraid of us – like the screaming stick figures in the communion line – and that’s when Jesus tells us, nonviolently, to stop.

There are all sorts of ways that we take too much, that we hoard things for ourselves, that we don’t leave enough for everybody. It reminds me of the beginning of the pandemic, when I walked into a grocery store in Manhattan and couldn’t find a single can of beans, or when pharmacies rationed Clorox wipes, or when there was no toilet paper to be found, or when governments forced prison inmates to make hand sanitizer to help with the national shortage. It reminds me, too, of when the price of surgical masks on Amazon increased as the pandemic spread wider – one pack of masks jumped from $125 to $220 in a four-day period. Looking into my own family history, as a fourth-generation Irish-American, I think of the potato famine. Growing up, I always thought the potato famine was caused by bad weather, like a drought – I thought it was related primarily to the land and to nature. I had no idea that this seven-year famine, which caused around one million deaths and created another one to two million refugees, causing the nation’s overall population to drop by 20–25%, was caused by the English doing exactly what the Tempter did to Jesus: creating an environment that breeds scarcity. While there was eventually a crop disease that wiped out potato plants in Ireland, this disease would not have had the devastating impact that it did if not for the English forcing colonized Irish families into singular reliance on the potato. Before England colonized Ireland, Irish people ate a diverse diet including meat, dairy, and grain products. Once colonized, however, and ruled by primarily English landlords, Irish farms were divided into smaller and smaller parcels of land so that English landlords could have more and more families paying rent. And, the English used the larger, more fertile areas of Ireland to raise cattle for English consumers, not allowing Irish farmers access to the meat raised on Irish land. On the small and less valuable parcels of land that Irish families struggled to rent, it was impossible to raise sheep, other animals, or to grow grain crops; only potatoes could grow. Thus the Irish people became dependent on potatoes, and when the potato blight arrived in Ireland it caused massive devastation and death. If the English had never forced the Irish into such dependence on a single crop, the Irish would have lived through the potato blight by eating meat, grain crops, and dairy. There was, originally, abundance in Ireland: a wide variety of plenty of food. But colonization created scarcity. English landlords took too much, they took what was not theirs, they did not share what they had, and they became, as my communion kiddo would say, scary monsters.

These actions, selfish and scared, are not limited to the English, or to the Tempter – these actions are carried out by all people with power, like the people who colonized the land we are on today, taking it from the Dakota people by force and by trick. When we have power, us, you, and me, we, too, participate in harmful actions like this – we take what is not ours, or we keep what never should have become ours, or we do not share what we have, or we hoard when we are afraid. At Lyndale, we are spending 2022 engaging in practices of reparations, working towards redistributing or surrendering some of the resources – financial and otherwise – that we hold as a congregation. By redistributing or surrendering some of our resources, we are saying no to hoarding, no to taking more than we need, no to keeping what never should have been ours. But at Lyndale, the reparations task force believes that redistributing or surrendering resources is just one part of what reparations asks of us. Reparations also invites us to tell the truth about what has happened, what we have done wrong, when we have been selfish and violent. Reparations invites us to be in right relationship with Black, Indigenous, and People of Color individuals and communities, to be in solidarity with them and to follow their leadership. And, reparations invites us to engage our spiritual selves in spiritual practices that help us refuse hoarding. This is what we call the four pillars of reparations: truth telling, spiritual practices, relationships of solidarity and followership, and resource redistribution or surrender.

In our Gospel today, Jesus models how our spiritual practices can help us refuse hoarding. When the Tempter invites Jesus to turn stone into bread, Jesus responds with truth-telling: “Humans are not meant to live on bread alone.” When the Tempter offers Jesus the power of kingdom and kingship, Jesus turns to his spiritual practices and says, “my Scripture teaches me to serve God alone.” When the Tempter tells Jesus to risk his life to test God’s power, Jesus acts in right relationship to God and responds, “I was taught not to test God.” Throughout these temptations, Jesus is asked to take resources – food, power, and safety – that were not his and were not meant for him. Through truth-telling, spiritual practices, and right relationship, Jesus was able to reject the temptation to take and keep resources that were not his by surrendering his claim to them. These are our pillars of reparations: truth-telling, spiritual practices, right relationship, and surrendering or redistributing our resources. These are the ways we continue to act out our belief in abundance, these are the ways we stop ourselves from falling victim to lies of scarcity, these are the ways that we remember God’s invitation to enoughness. These are, in other words, the ways we stop ourselves from becoming communion monsters: our stick-figure hands full with yellow crayon representing all the things we have taken from other people, all the things we have that were never meant to be ours.