Communion Is Every Day 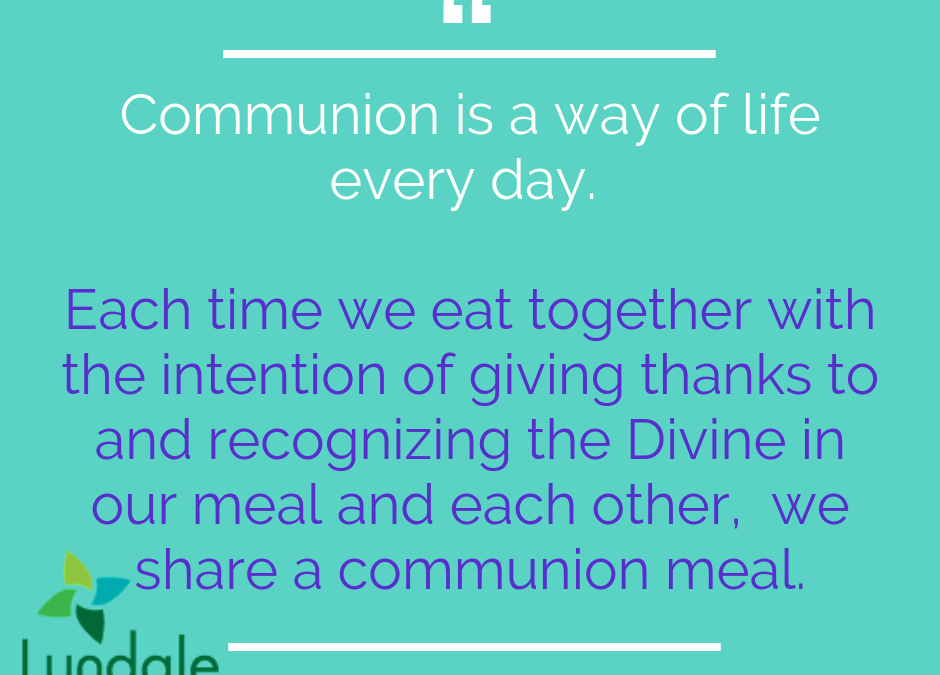 The other night, I found my almost two year old daughter playing with some of her animal toys. She is an explosion of words these days, so I could hear her chatting with them before I could see them. “Having food and drink!” I heard her say. Her animals were in a circle. “Having Amen!” she continued. “Mama, sing ‘Amen’ song?” she said when she saw me.

The “amen song” is the Johnny Appleseed camp grace I also grew up singing before dinner. Do you know it? “Oh the Lord is good to me and so I thank the Lord! For giving me the things I need, the sun and the rain and the appls seed. The Lord is good to me. Amen, amen… squeeze.”

This moment of my daughter’s play captures everything that matters about my Sabbatical time. I cannot tell you what a tremendous gift and privilege it was to have these three months of Sabbatical – for me, for my family, and for my sense of call to ministry. I believe everyone should get a paid sabbatical. Seriously. Thank you.

When I left for this blessed time of rest and reconnection with the Divine back in July, I felt like a shadow of myself. I was tired, burned out, and angry about getting to that point. I knew I needed rest. But I could barely imagine what rest even meant. I had written a proposal for Sabbatical about studying meal practices in the early church and also the way CrossFit gyms have become a kind of functional church to my generation because I had a hunch rest had something to do with embodied spiritual practices for me.

But honestly, for the first month, I didn’t work out much and I barely cooked a real meal. We had a slew of lovely family visits in between which I slept as much as is possible while parenting a toddler. I hadn’t yet slowed my internal metronome at all. I just had more time to stop and pass out between bursts of activity.

It wasn’t until the second month of sabbatical that I started to enter into the true Sabbath part, the part about reconnecting with the Divine within and beyond me that rest is supposed to help us do. I organized 5 friends from seminary to meet with one of our favorite professors – Rev. Dr. Hal Taussig – from Union Seminary for a spiritual direction retreat. Hal is a biblical scholar and retired pastor. He is one of those people who walks the walk of his spiritual life and his scholarship with so much integrity it radiates off him. He is also one of the most gentle humans I’ve ever met.

Five of us who were used to being in charge of a room – pastors and chaplains – got to sit with each other for a couple of days and just relax into our own spiritual needs and desires. And we got to witness each other. After about ten years of knowing each other and keeping in varying levels of contact, it felt pretty miraculous to hear each other’s winding path stories of life and ministry. There was so much in common about this stage of our ministries in so many wildly different contexts. And in that shared knowing, I felt the rush of business in my body and soul finally slow down. I remembered that my ministry journey has been unfolding not just these last five years with you beloveds, but since I was a nerdy kid who loved communion.

Communion was the ritual at the heart of the faith community I grew up in. Many of you have heard this story. I grew up at a predominantly LGBTQ church in Minneapolis in the 1980s. This was the height of the AIDS crisis. I was one of the only kids around, as this was long before the “gayby boom.” Communion looked to me like a bunch of group hugs. People stood in small circles of chosen family receiving a prayer and the bread of life and the cup of liberation, as we called them. It was the only time all week many people experienced touch. By middle school, I knew I wanted to nourish communities of this kind of holy, subversive, and life-changing communion.

On the flight home from that spiritual direction retreat, I began reading a book about communion and ancient meal practices in the Greco-Roman world written by the professor I’d just been with. In the first chapter, he quotes feminist biblical scholar Karen King:

“The beginning is often portrayed as the ideal to which Christianity should aspire and conform… But what happens if we tell the story differently? What if the beginning was a time of grappling and experimentation? What if the meaning of the gospel was not clear and Christians struggled to understand who Jesus was?”[1]

When I read this, I realized we are in another beginning moment, so to speak, of Christianity. At least, those of us who are trying to do Christianity outside the dominant paradigm of power and control in this country. This is absolutely a time of grappling and experimentation, of trying to figure out again who Jesus was and what Gospel or Good News even means right now under this political regime.

The book continued to tell a new story of Christian origins. When the historical figure of Jesus is said to have lived and when the people trying to make sense of his death began to experiment together with following his teachings, another empire, the Roman Empire was in charge. This empire had largely decimated the traditional paths of connection and community that nourished people’s lives together. And yet, in the middle of all that chaos, there was one form of association that had emerged right under the nose of the Roman Empire, what can be loosely understood as supper clubs.[2]

All different kinds of people gathered with all different kinds of shared interests – religious and secular – for communal meals or banquets. They ate together, they paid tribute to a patron God or Goddess condoned by the Roman Empire, and then they had a time of teaching or conversation and wine. These meals had intense rules of etiquette for how people interacted, where they were allowed to sit, who got to eat meat and who didn’t, how people sat or, as tradition had it, reclined. See the picture on the front of your bulletin. You can imagine many of these rules had a lot to do with citizenship status, gender, wealth, age etc.

As Rev. Dr. Taussig puts it, “[The cover of these associations and their banquets] allowed early Christians to try out new behaviors in dialogue with their vision of the realm of God. The meals became a laboratory…”[3] In other words, these meals were church services. People didn’t meet on a Sunday morning and sit like we do and then have a brief two bite ritual meal of communion once a month to remember Jesus. They met for a meal, at dinner time, and made that whole communal meal into church. They used the familiar form – eating time, blessing time, talking/teaching time – but subverted many of the rules so that they were following Jesus’ teachings as best they could make sense of them and not the dominant norms of their world. Everyone got to eat everything – instead of the meat being reserved for the wealthiest patron. Everyone reclined instead of sitting, not just the elite. All genders and all classes shared together in all the elements of the meal. And of course, they honored Jesus instead of one of the Roman Gods.

It was these meals that Paul was writing about and critiquing in our scripture for today. Paul was calling out the wealthy members of this particular meal community in Corinth for not allowing those who didn’t have access to dinner anywhere but this time to eat their fill. What I had never realized was that this must have been the norm of how Paul understood what church looked like – a shared, ritualized meal through which participants enacted and remembered the teachings of Jesus. Of course. Everyone needed to eat. Most people didn’t have leisure time to gather socially or religiously. So meals became religious practice, meals became church.

When I got landed back home after reading all about these meals on my plane ride back from retreat, I started cooking in earnest. I cooked dinner for my family as often as I could. With some trial and error, we figured out a time that worked across the three generations of our home to eat and how to make a meal for everyone out of the same food. While I had been away on retreat, my family began without me to sing the Johnny Appleseed blessing at the beginning of dinner. And within a couple weeks, we had our own little nightly dinner ritual. Usually it was my daughter who initiated the singing that pulled us all to the table at the same time. On stressful days, on days nobody felt like singing and on days we were easily joyful, we sat, held hands and sang. And ate. And the day was better because of it.

Why am I telling you all of this? Because this too is communion. Each time we eat together with the intention of giving thanks to the Divine, of recognizing the divine in each other and the ordinary bread we eat and cups we drink from, we share a communion meal. Communion is so much bigger than once a month on a Sunday. It’s a way of life every day. It might look different for you. It might look like a cup of coffee, a piece of toast and a moment of silence each morning looking out your window. But I wonder how your life would change if you found a way to practice communing with the Divine in the ordinary dailiness of eating?

I’m also telling you because I think we have some collective grappling to do like the early Jesus followers who ate together in the 1st century about what church means and looks like today. Some church historians put us right now in another moment like the Reformation of massive church upheaval, what I like to call a “crisi-tunity” – a crisis/opportunity. Many churches will close because we live in a world where the model that has existed in recent collective memory isn’t attracting the same numbers of participants.

The 1st century Jesus followers were at another point of crisi-tunity. They had lost their teacher and they didn’t know what could be born of his teachings yet. So they took a form of gathering that was within the fabric of daily life for everyone in the Greco-Roman world, subverted it, and made it their own form of resistance to the oppressive norms around them. They took something everyone needed – a meal – and made it church.

What is hiding in plain site, waiting for us to notice that it is exactly what church might need to look like for the next generations of Jesus followers? There are more and more people worshipping through what is often called “dinner church” now, especially among my generation. They gather very much like these earliest Christians over a shared meal, read some scripture, and craft a sermon through their shared witness and conversation, instead of one person’s sermonizing like me up here now. There are so many possibilities.

May we be brave enough to pay attention to what communion, what worship, what holy community might be waiting to be born among us here and now for the next generation of Lyndalians.

[2] Paraphrasing premise from Taussig’s In the Beginning was the Meal. See page 14.