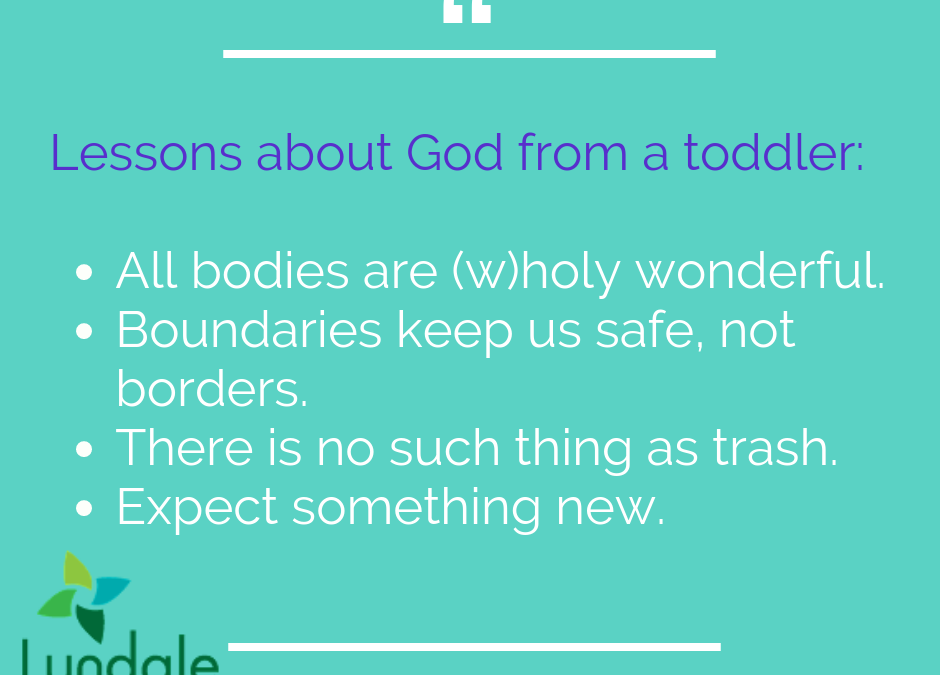 Since I last preached on Christmas Eve, we have had a baby born into my family. And we now have a toddler. Which makes me wonder, what was Jesus like when he was a toddler? If he truly was both fully divine and fully human, incarnate as we say when we are feeling fancy as pastors, were naps any easier? I think Jesus as a toddler probably had a lot to say. Loudly. And did he start walking on the water at bath time? There are so many bad, theologically unsound jokes to be made here.

But in all seriousness, I love this story. I love it not because of its uniqueness, as though Jesus was like Jack Jack with superpowers in The Incredibles. I love it because it is a universal story of birth and new life and the holiness of each of us human creatures. It is a reminder that God is born all over again at each birth. Christmas is when we honor that divinity within ourselves and each other every year.

So despite the fact that as a feminist it makes me all kinds of uncomfortable to preach from the perspective of a mom because its so easy while living amidst patriarchy to be seen as only a mom, you are about to get a few lessons about God, learned from my toddler and some crowdsourced from the toddlers in your lives too. What would the shepherds have praised, had they arrived at Jesus’ toddlerhood instead of infancy? What would the angels have sung about? What would Mary have pondered in her full and yet exhausted heart? Here are some lessons.

Lesson 1: All bodies are (w)holy wonderful. August, our 1 year old, sleeps in what is basically a pillow with holes for her head and arms to peep out of. Every morning when we unzip it, she is excited to see her toes again. She greets them with delight, giggling in a sing-song way like the chorus of angels of our scripture as I count them. Imagine if one of the first things you did every morning was check out your toes and giggle about how wonderful it is they still exist after the long night? Sure, most of us in this room have object permanence – we know our toes will still be there in the morning if they were there last night. But when do we lose that wonder at our bodies?

We celebrate a story all about God taking on human form tonight, and still strangely, Christians are remarkably skittish about bodies. The church has spent a good deal of energy and money cultivating denial about them. And yet here we are. Undeniably embodied. Some of us have an easier relationship with our bodies than others. Some of us have bodies the world welcomes more than others. Some of us have bodies the world tries to contain or detain or legislate or deny or ignore. But this story reminds us that all bodies, and perhaps especially the bodies the world’s powers seem to disdain, are (w)holy, wonderful bodies that deserve a chorus of angels to praise them. Toddlers know this, not just from spotting the miracle of their own toes, but from noticing all the older, bigger, knobbier, different kinds of toes around them in their particular wonder. Here ends Lesson 1.

Lesson 2: Boundaries keep us safe, not borders. My sister told me once that parenting for the first 18 months is basically trying to prevent a tiny human from accidentally hurting themselves. This is called establishing boundaries. I enjoy the image of Mary and Joseph running around after toddler Jesus, constantly swatting things away from his mouth and gently saying in Aramaic, “Not for eating.” Toddlers are supposed to test and push and rant against boundaries. It’s how they learn what keeps their sacred little bodies safe.

Toddlers are also excellent sniffers of what are a healthy boundary verses what is an arbitrary border, a line in the sand somebody in charge has drawn for their own convenience or gain. Try telling a toddler not to go from the bedroom to the hallway because you are busy trying to fold laundry and you want one more minute before they escape your view. The distinction between rooms, the border between the two, is meaningless to them. That’s because the whole idea of a bedroom verses a hallway is just a story adults have told ourselves about organizing space.

The same goes for the borders between countries. Borders are just stories we tell about space, land and groups of people for the convenience and gain of those who get to designate them. What would toddler Jesus make of the story we adults are telling ourselves about the border of Mexico? Or would toddler Jesus even be allowed past that border with his family seeking asylum?

Lesson 3: There is no such thing as trash. At least several times an hour, August finds something on the floor I haven’t noticed and picks it up to inspect it and possibly eat it. She was fascinated with one such tiny thing the other day and held it out to me proudly from across the room. I couldn’t see it until it was right in my face and so was her big, 5-toothed grin. What was this wonder of creation? A gold “made in China” sticker, folded in half. She held it up to the light, like a jewel. It had the same value, as far as she was concerned. Toddlers do not understand late stage capitalism, it seems.

Instead, they are equal opportunity enthusiasts. As one dad friend of mine says, “[Toddlers have] a focused expectation and unyielding trust that everything is important and worth knowing.”[1] Maybe that’s part of what draws us like the shepherds out of our fields, or in our case, out of our phones, around these Divine toddler creatures. They remind us to look for the glory in everything, most especially in the places the world deems trash. They remind us that trash is a construct we have misapplied not only to things, but creation and people and sometimes even ourselves. What might God have made gorgeous, what might She have made shining, what might They have created magically holy that you have written off as trash? And what might they reveal if we hold them up to the light?

Lesson 4: Expect something new. Every morning, August and I read a story. And then we read it again. And again. And again. And again. My adult brain gets bored, despite how cute she is carrying around a book half the size of her body and plopping it on my lap over and over. “For grown-up people are not strong enough to exult in monotony,” said British writer GK Chesterton. “But,” he continued, “perhaps God is strong enough to exult in monotony. It is possible that God says every morning, “Do it again” to the sun; and every evening, “Do it again” to the moon… It may be that God has the eternal appetite of [a toddler].”

Repetition is boring for adults because we do not expect to notice something new or to learn something more with each repetition. Toddlers, like God, on the other hand, expect to learn something new with each repetition. Each reading of “The Snowy Day,” for example, is a revelation of a newly understood sound, a picture seen differently, a word that comes into the focus of meaning. The book may be the same, but she perceives it differently as she grows.

That’s why we have rituals too. That’s why we have Christmas. We tell the same story. We sing the same songs. The magic of the Christmas story is, in fact, that it doesn’t change, but that we change every year reading it. What would happen if you treated each monotonous task of life – like brushing your teeth or sending that last late night work email of the day – like a ritual, like it might be the same but it could also teach you something new? What would happen if you expected to learn something new about your partner’s behavior, your colleague’s thinking, your family’s history in each every day interaction, as though it too were a kind of ritual? What would happen if you expected something new of us collectively – in each Sunday at this church, in each Monday morning work meeting, in each 24 hour news cycle?

I’m not saying to do the same thing over and over again and expect different results. That’s a recipe for rage. I’m saying that in the stuff of life that we do over and over again, how can we make of it a ritual with the space to perceive it differently, to grow ourselves, to see new possibility each time? How can we be a little more like God as toddler, excited to do each thing again?

Maybe what makes Jesus most powerful is that he managed to grow up AND still embody a toddler-like sense of the world. Maybe being a disciple, a student of Jesus, isn’t about becoming something else, but remembering who we have always been. Maybe Christmas is the same, a time not about anticipating a new birth, but remembering our own.