Blessed are the protesters 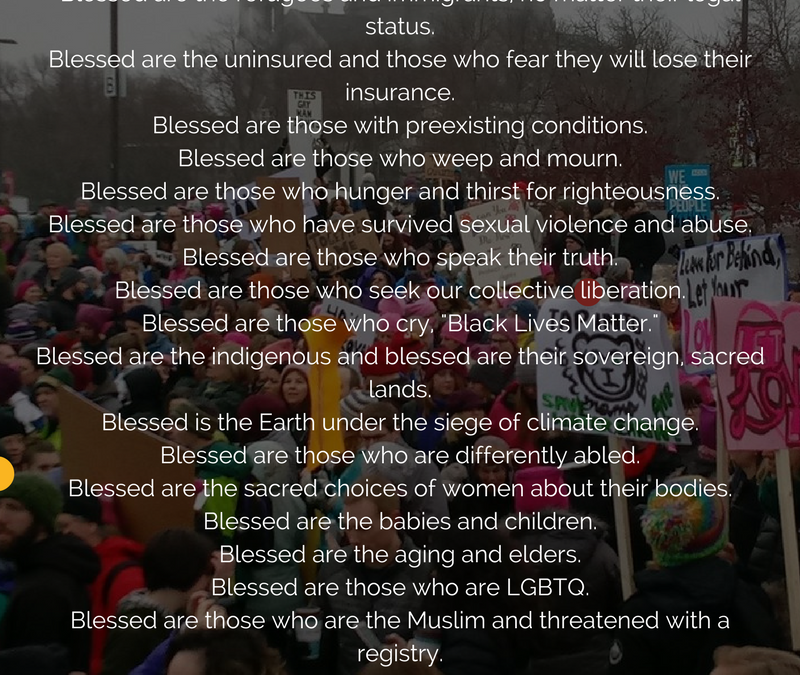 [On the Sunday after Inauguration, 2017]

As I imagine this scripture, I try to put myself in the scenes of this ancient story. John the Bapist – the radical dissident against the Roman Empire who was both Jesus’ spiritual and political mentor – has just been arrested. And that means there’s a very strong likelihood that Jesus won’t see him again, that John will be executed for all those anti-empire activities he’s been up to, like baptizing people in the river outside the city as a way of committing to a God beyond empire, not Caesar known as a God in his times whose face and name was branded on everything in the city.

I imagine Jesus grief-stricken and angry, making his way to the Sea of Galilee – a wide open space where maybe it was easier to clear his head and spirit and sit with God. I’m not sure if this was familiar landscape to him or not. But I do know that he was among the Gentiles, not the Jews, in this land. He was not among his own people, even if the land was familiar. And yet, in the middle of all the feelings of loss of a personal hero, beloved comrade, cherished teacher, the man who baptized him, Jesus – who is generally renewed like me alone somewhere (though I would prefer a cozy couch to a mountain or dessert), this man starts to reach out to those immediately around him. And of course, he’s at a Sea, so who is there but fishermen.

Fishermen, like today, are not exactly at the top of the social ladder. They are often working odd hours, struggling to make a catch that will make ends meet, covered in, well, fish. They probably don’t smell very good. They probably aren’t exactly the most well-schooled in the Hebrew Bible. But they are the ones in front of him when he’s been sitting by the Sea of Galilee long enough to realize what needs to happen next in the middle of this point of unknowing grief and loss of a leader. He needs to not be alone.

I don’t think it’s entirely a “love the one you’re with” moment, but I don’t think it’s that far off either. I imagine Jesus strolling along pondering how he would continue John’s legacy as he builds the next stage of the movement for subversive peace and love. I imagine him knowing he can’t do it alone and trying to get up his courage to remember that it’s not just him, but that he’s come to a point in his life that he knows he’s deeply connected to the holy in the world, that he wanders around in a bit of a liminal, thin space where the realm of God, the dream of beloved community, the state of collective enlightenment – whatever you want to call it – is really just a deep breath away. And yet in his full humanity, where who knows if they guy had blisters from all that walking in sandals with no arch support, he surely had crises of confidence and a bit of social anxiety too right before introducing himself to those fishermen.

As Jesus was walking along the shore of the Sea of Galilee, he saw two brothers – Simon, also known as Peter, and his brother Andrew – casting a net into the sea; for they were fishermen. Come and follow me,” Jesus said, “and I will teach you to fish for people.” The two men left their nets at once and followed him.

While some of us recognize the names of these two – Simon Peter and Andrew – because they would go on to become some of Jesus’ first disciples in the story we now tell, I’m not sure Jesus knew those names until that moment. I imagine that they met by the shoreline and just started talking. I’m guessing there wasn’t a lot of small talk. I imagine Jesus as the kind of guy who could do small talk, but was probably a little bored by it too. I imagine that instead he started talking like a community organizer. He started to get curious about these two brothers, wondering what made them tick, what their deepest needs were, what hurt them about the world they lived in under Emperor Caesar. I imagine he probably did a lot more listening than talking, actually. And then those two brothers felt so seen and heard, so loved by the simple act of listening deeply by this man who radiated holy love, that when Jesus got to his movement building ask, “Hey, come follow me? Let’s grow this movement with more people?” They felt their own spark grow in their bellies. Or maybe they felt a warmth in their chests, the kind of warmth you feel when you haven’t realized that your heart has been a little shut down for a while and suddenly it’s not. The kind openness you feel when somebody you love and trust gives you a hug that says I know you in all your mess and I love you not just in spite of your mess but also partly because of it.

And so they began to walk together and one turned into three until they came to some more fishermen and the scene repeated itself. Simon Peter and Andrew watched and listened, learning how to listen from this Jesus guy, learning to watch for the spark of the divine light up in the bodies of these other guys just going about their daily work too. Waiting as he got to the ask, “Hey guys, come with us? Let’s grow this movement to build the realm of the divine, the beloved community, here and now?” And they too followed.

I also imagine their protest chant was a little too, well, intense, for most people to get. It was something about repenting, for the realm of heaven is at here – which really isn’t a very sexy slogan. But the guy who kept saying it, said it with such gentleness. Those rogue priests who had joined the ranks knew that another word for the Hebrew word “repent” was to “turn around.” Maybe they had side conversations along the way, “Hey, don’t freak out. It’s OK. He’s just saying to turn around. Turn around from whatever you are doing, whatever you think is more important than this moment we are in, than the work and joy of love. Turn around.

The story of this growing protest and pilgrimage continues into the next chapter of the Gospel of Matthew and culminates in the passage of blessings we call the Beatitudes. Jesus is starting to understand that his favorite chant, “Repent, for the realm of God is here” needs a little more explanation. What are people supposed to be turning towards, anyway?

So he began to explain.

Here’s my interpretation of this famous passage for us this morning:

Blessed are we, the people, who inaugurate our resistance this morning just as Jesus inaugurated the resistance of his disciples and all those who followed in his way of love and justice over 2000 years ago.