Believe the Women. Or Miss the Resurrection. 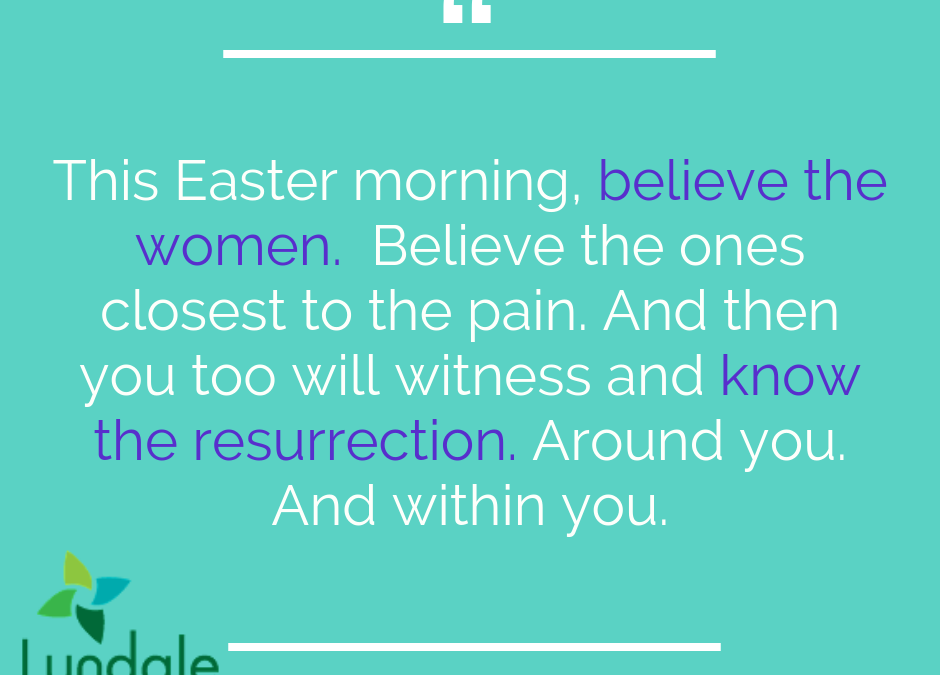 “Power is the ability not just to tell the story of another person, but to make it the definitive story of that person,” says Nigerian writer Chimamanda Ngozi Adichie. At the end of the 6th century, Pope Gregory the Great wrote a sermon that “would come to dominate the imagination of the West…” He made the case that many of the stories of unnamed women in the Gospels of John and Luke were the same sinful woman, and that this woman was Mary Magdalene.

She had been with him for decades and today was no different. He was in the hospital where I worked as a chaplain at the time. After watching him endure so many tests it made her heart tired, she had finally stepped outside for a bit while he was taken downstairs for the latest round. She came back to an empty hospital room. She knew something was wrong.

Downstairs, in the bowels of the hospital, a team of at least ten people surrounded her beloved. His heart had stopped. They used the full weight of their bodies to try to jumpstart it back to life. They breathed for him with plastic lungs. They had been trying for some time by the time she came quietly into the room, weaving her way through their business directly to his head. She leaned just a few inches away from his face, caressed his thinning hair, and whispered into his ear telling him over and over again how much she loved him. We thought we knew. We thought he had been down too long. We were sure he was gone. She told us he was alive. We didn’t believe her.

Philando was driving with his girlfriend and her daughter when it happened. A routine traffic stop in the suburbs of the Twin Cities for a broken taillight. Being a Black man behind the wheel meant being pulled over by the cops. This was the 53rd time.

“All the time he was getting pulled over, I was the one getting infuriated,” said his mom, Valarie, recently. “He was always calm. He was the one like, ‘Mom, it will be OK.’ I can only imagine that when he got pulled over [that time] that he was like, ‘hey, this is the routine. I give them my ID and I go about my way.’”

It was only routine this time in the way that racism and violence have become routine as a part of our policing system.

“It was in his wallet, his license and registration. You told him to get it, sir,” said Diamond Reynolds to the police officer who had just shot her boyfriend. She was livestreaming now on Facebook, begging the world to see, to believe.

“You told him. He tried to tell you he was licensed to carry and he was going to take it off. …He’s a good man. He works for St. Paul Public Schools. …He’s never been to jail, anything… The police just shot my boyfriend for no apparent reason.”

He must have been doing something, we thought. He must have given them a reason to shoot him, we insisted. We didn’t believe her.

“How are you so sure that it was he?” Sen. Dianne Feinstein asked during the hearing of Dr. Christine Blasey Ford last fall.

“The same way that I’m sure that I’m talking to you right now. Just basic memory functions,” Dr. Ford said. Various neurotransmitters, she continued, “code memories into the hippocampus, and so the trauma-related experience is locked there, whereas other details kind of drift.”

“So what you are telling us, this could not be a case of mistaken identity?” Sen. Feinstein said.

Later that day, Brett Kavanaugh insisted: “I have never done that to her or to anyone. I am innocent of this charge.”

And then upon his confirmation to the highest court of the land, the man sitting in the office of the President of the United States said: “He’s going to go down as a totally brilliant Supreme Court justice for many years.”

Mary Magdalene, Joanna, Mary the mother of James and the other women had been with Jesus as his followers all along. The last week had been nothing different, except for the intensity of the threats from Roman authorities now that they were in Jerusalem.

But these women stayed with him, I imagine taking shifts in their vigil of love. Fear is more manageable in good company. They stayed with him through the arrest. They accompanied him to the cross. They sat there through his agony, powerless to stop it, but powerful in the love they offered him through their refusal to leave. They followed his body as it was placed in the tomb, likely sealed and guarded. Spices in their pockets, oil in their bags, rotating their vigil until the third morning they finally found the strangeness of silence. The tomb was open. His body was gone.

In their exhaustion, and in their humanness, I imagine they couldn’t remember what Jesus had said would happen – that death would not have the final word, that empire’s violence would not have the final word. Angels greeted the women to remind them. The ones who were faithful through terror and death were of course the first to know the resurrection. And then they went to tell the other apostles.

I have been having some serious feelings about these lines from our text all week long. I have been angry that Jesus was not the only one who was betrayed during Holy Week. These women were also betrayed. The Greek word translated here as “believe” – they did not believe them – is more closely translated as “betrayed, ” – as in they betrayed them. And I have also been angry that we came so close to missing the whole resurrection story on which our tradition rests because of that betrayal. Resurrection, the reality of love’s triumph, will be real no matter if it is ever witnessed. But the power of that resurrection needs human cooperation, needs witnessing and telling, to flourish.

Adichie continues, “When we reject the single story, when we realize that there is never a single story about any [person or] place, we regain a kind of paradise.” We are blessed with four very different gospels in the canonized Bible. And yet, there are many more most of us have never heard of. There is a Gospel of Mary. It was just too threatening to the imperial church’s powers to stay in the bible. You see, the Gospel of Mary includes the Jesus story we know and love, but it also includes Mary as the most trusted of the apostles to which Jesus entrusted his visions to be told to the apostles after his death. In this Gospel, Mary teaches the disciples that resurrection is not just a journey at the end of life, it is the “ascent of the soul” towards healing and justice in this life. It is a journey that is the birth rite of ALL of us, not just Jesus.

And so, it is not just Jesus who lives this morning. It is all of us who embrace this journey of the soul. And most especially, it is Mary. We resurrect Mary together each time we believe, each time we are faithful to those closest to the pain and those enduring crucifixion in our culture. When we bear witness with her and her kin-women, we will also find resurrection.

I went to his room the next morning. I found him surrounded this time not be a massive team of hospital workers, but by his wife and his family. He wouldn’t leave the hospital alive, but his family would be able to say goodbye to him, would be able to kiss him and tell stories and whisper I love yous, while he was still alive. It’s not a triumphal resurrection, but it’s still a resurrection. She told us he was alive and eventually the medical system found enough humility to believe her. And when we believed her, we too got to witness his quiet return to the living for just long enough for love to surround him and grow deeper and wider.

They didn’t win the court case. Does anyone, really? Justice is so much more complicated than we know how to adjudicate. But Philando lives. He lives because Diamond dared to tell his story to millions on Facebook and some of us believed her despite all the smears. He lives because Valarie, his mother, is deeply faithful to his memory. Philando, a cafeteria supervisor at JJ Hill Montessori school, was known to pay out of his own pocket for the breakfasts and lunches of children he who couldn’t pay. He lives on in the bellies that are full instead of empty in children across the St. Paul Public Schools for whom Valarie continues to raise funds to cancel school lunch debt in the name of her son. He lives in the justice she seeks as she advocates for the end of police violence and in the grief support she offers parents of victims of gun violence. We didn’t believe Diamond fast enough to prevent Philando’s death. But we believed her and Valarie enough to resurrect his memory.

“Even grief can be a resurrecting force,” writes a fellow pastor. The grief that washed over our country as we listened, riveted, to Dr. Christine Blasey Ford testify last fall resurrected something in those of us who believed her.

Resurrection doesn’t mean death and oppression end once and for all like a fairy tale. Resurrection is not a kind of purity politic. Resurrection is messy and sometimes painfully slow and it always happens in the middle of the horrors before us. The kind of resurrection we witnessed alongside Dr. Ford was an ascent of her soul past all the clinging forces of toxic masculinity. It was the kind that reminds us to be faithful to our own stories, to believe ourselves, so that we too might ascend.

Beloveds, this Easter morning, believe the women. Believe the ones, the Marys, closest to the pain. And you too will witness and know the resurrection. Around you. And within you.