Being Church Means Being Uncomfortable 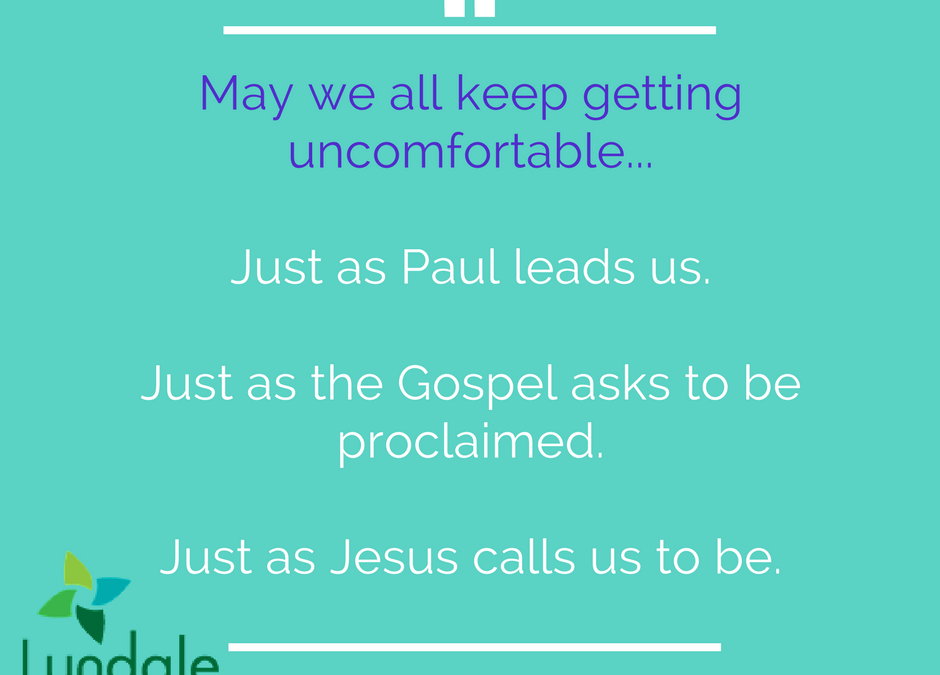 So… wow, I think this is going to need some unpacking! My name is Claire Klein. I have been coming to Lyndale for 8 years and now I am in seminary studying to be a chaplain… and this is my first sermon here with you! Leave it to me to try to pick apart the meandering theological loops and tangles of the writings of Paul at my first go. But, as I was looking over the different scripture readings assigned for today, however, these verses from the letter of Paul to the church community in Corinth – a trading town in the south of Greece – kept jumping out at me. I have learned that it is best to pay attention when things do that.

My first reaction to the opening sentence “If I proclaim the gospel…” was abject terror. A commission to “proclaim the gospel?!” Thinking about “proclaiming the gospel” or “evangelizing” is not what I wanted to sign up to do when I got baptized or confirmed… or even chose to go to seminary. Proclaiming the gospel is what those OTHER Christians try to do to people. I’m not that kind of Christian! It is this same terror of being judged, of having assumptions made of me that courses through me when I hear myself telling people that “I’m in grad school” to avoid the explanations about being “in seminary.” “It’s a cool kind of seminary… we have a Buddhist on faculty! We have a social justice focus!” as if that it explains it all quite clearly. Or how when I tell people about my going to church, I feel compelled to add the caveat “Our minister spoke at the Women’s March and goes to protests! We do white privilege training as a congregation!” To my patriarchy-fighting millennial “spiritual but not religious” “that-is-all-just-magical-thinking” kind of friends, bearing the “proclaiming the gospel” part of this church identity has become tricky indeed.

What does it mean to bear the title of “Christian”? To follow this guy Jesus? To do so without an asterisk? In an era when these terms have been co-opted by extremists who claim to speak for all of us, as if the only Christians are white, rightwing evangelical men, calling oneself a “Christian” has become a more complicated question.

Paul, the founder of many new churches around the ancient world looking to follow Jesus, was also going through an identity crisis of sorts. He was not Christian. There was no such thing as a “Christian” yet. He was a Jewish man trying to figure out how to incorporate this miraculous, traumatic, amazing Jesus event into his faith alongside other Jews. The scripture we read for today starts in the middle of a longer argument Paul was making about himself being a true “apostle.” The other early church leaders that were out in the world consulting with Jesus Followers – Peter, Thomas, Andrew, Timothy, James, John – were there with Jesus in person as disciples. According to the book of Acts, it was not until after Jesus’ death that Paul, then a Jewish priest persecuting those who followed Jesus, experienced a vision on the road to Damascus that spiritually re-routed him for the rest of the life. He became a Jesus follower himself and was prolific in starting and consulting with early churches. In the part of his letter to Corinth we read this morning, he was trying to justify his authority. Perhaps not having been an eye-witness to Jesus made him doubt himself. Doubt whether he should really be doing this. Even though he wasn’t THERE there with Jesus, he still had the ability to speak about his faith in this Jesus dude and guide this church… right? He decided not to accept payment from Corinth and said that speaking the good news was payment enough.

Paul continued to wrestle with this idea. His identity. He was a shapeshifter – highlighting different parts of his identity depending on who he was serving. He was standing in the middle of a family feud about who could be a part of this Jesus movement. He was “A Jew to the Jews… under the law and outside the law… weak…” he did this identity shifting so much that he had “become all things to all people.” …. Now this is passage that resonates with me too. It seems to me like Paul was just putting out fires of practical issues (to circumcise or not? to eat sacrificed meat or not) in Galatia, in Rome, in Ephesus with all these churches trying to discern who they are. While we was trying to play referee to all these church squabbles, he also managed to write beautifully about his faith and not get de-railed about the bigger picture of not just his call, but the collective work of the Body of Christ. Or as Rev. Lawrence Richardson reminded last week in his sermon to us: ‘To be the hands and feet of God in the world every single day.”

The church in Corinth was trying to figure out their place in this call. While it would be anachronistic to label the group in Corinth a “Christian” church, Paul wrote to this church upstart in Corinth as they struggled with what it meant to be a church that followed Jesus the Christ. In the midst of this diverse community struggling with class conflicts, with mapping the boundaries between church and society, and with trying to figure out how to live in a religiously pluralistic society, this Local Church in Corinth was trying to define who they are.

Our denomination the United Church of Christ names the Local Church as the basic unit of the church. Instead of a top-down definition of who we are and what we do, we have the freedom of choice in defining this for ourselves. As Mary Susan Gast, Conference Minister Emerita of the Northern California Nevada Conference of the UCC writes in her book That We May All (Finally) Be One, “Local Churches in the UCC are not all alike; we do not worship, undertake mission, or organize ourselves according to uniform standards. We are not a franchise operation.” … or as I like to explain to people a la Monty Python “I thought we were an autonomous collective!”

What does it mean, then, to be UCC? While each Local Church has its own flavor, we do pride ourselves on the extravagant welcome that unites us in our UCC identity. When the UCC God Is Still Speaking campaign started a few years ago, we were asked to examine our day-to-day practices as Local Churches and truly challenge ourselves to live this out better. Bishop Yvette Flunder is a pastor of City of Refuge UCC in Oakland, California and she writes about her church’s welcome: “We keep pushing ourselves to identify those who are on the farthest margins of church and society… those who the church can just barely accept. And then we go to them and ask them in. Church should not be a private social club. If someone isn’t making us uncomfortable, we are not being the church.”

…If someone isn’t making us uncomfortable, we are not being the church. What makes you uncomfortable in this Jesus Following business?

Clyde Steckel has been writing about the Church, and particularly the UCC, as a faculty member at United Seminary and in his retirement. And fun fact, he’s a member at First Congregational UCC right here in Minneapolis! In his books New Ecclesiology and Polity (fancy words for church and how it is governed) and Finding the Church, Rev. Steckel pushes the definition of what could be considered a Local Church. This has made a lot of people in the UCC pretty uncomfortable.

The Local Church is the group of children gathered for a worship service in the hospital where he served as chaplain. The Local Church is the meeting of students getting ready to protest the Vietnam War when he served as a University of Minnesota campus minister. United Seminary became a type of Local Church for him…. I jumped for joy when I read his perspective on the Local Church. Experiencing devotions with my memory care residents at Gianna Homes have been some of the most sacred moments in my life. Gathering around the table at Moon Beach Camp in Wisconsin certainly feels like church to me. Marching down Summit Avenue in St. Paul toward the capitol building last winter during the Women’s March was certainly church.

Rev. Steckel offers this definition: “The church consists of followers of Jesus Christ gathered at the font, the table, and the pulpit and scattered in the world to engage in ministries of compassion and justice-seeking… the gathered church reenacts, at the font, table, and pulpit, the narrative of God’s self-revelation in creation, in Jesus Christ, and in the Holy Spirit. When that narrative is reenacted, the followers of Jesus Christ are empowered to engage in his ministries of compassion and justice-seeking in the world.”

Perhaps the number of times I just said “Jesus Christ” made you uncomfortable. Some might be made uncomfortable by the lack of any prescribed ordination or belief in this definition of church – just followers of Jesus gathering together out in the world. Having no particular building or stained-glass windows might be an uncomfortable understanding of church… though we at Lyndale got over that in our little journey from the old building through Intermedia Arts to sharing SpringHouse. Yes, Lyndale, you truly embody the old Sunday School song “The church is not a building… the church is not a steeple… the church is not a resting place, the church is the PEOPLE!”

Last week, we joined together in our annual meeting. We had a lot to celebrate! We also had a lot to talk about. Lyndale has been trying to define who we are in this moment in time and explain it to the world through our mission statement. While many of us understand the “vibe” that is lovely, lovely Lyndale, we don’t always agree on what words to use to describe our compassionate and justice-seeking work. What do we call ourselves? Perhaps those words make some of us uncomfortable… challenged and others empowered. Perhaps we are like Paul and want to justify our presence despite doubting our adequacy. We ask ourselves difficult questions about our identity. Some of us can answer more emphatically than others. Are we the kind of church that is willing to get arrested for the work of social justice? Are we the kind of Christians who will call out racism in more places than just Facebook? Are we the kind of church who could name themselves Jesus Followers? Christians?

I am on the track toward ordination and that process is named being “in discernment.” No decisions are final yet, no path is entirely laid out before me… just an invitation to explore and ask questions. And we are all doing this kind discernment together in the context of generations of Jesus Followers who have struggled with their personal identities, of churches trying to suss out how to live out their call. May we all keep asking these questions. May we all keep getting uncomfortable – just as Paul leads us. Just as the Gospel asks to be proclaimed. Just as Jesus calls us to be.

Gast, Mary Susan. That They May All (Finally) Be One: Covenant, Hospitality, and the

Expanding Identity of the United Church of Christ. Cleveland, OH: The Pilgrim Press, 2016.

Nasrallah, Laura S. “1 Corinthians.” In The New Testament Fortress Commentary on the Bible.