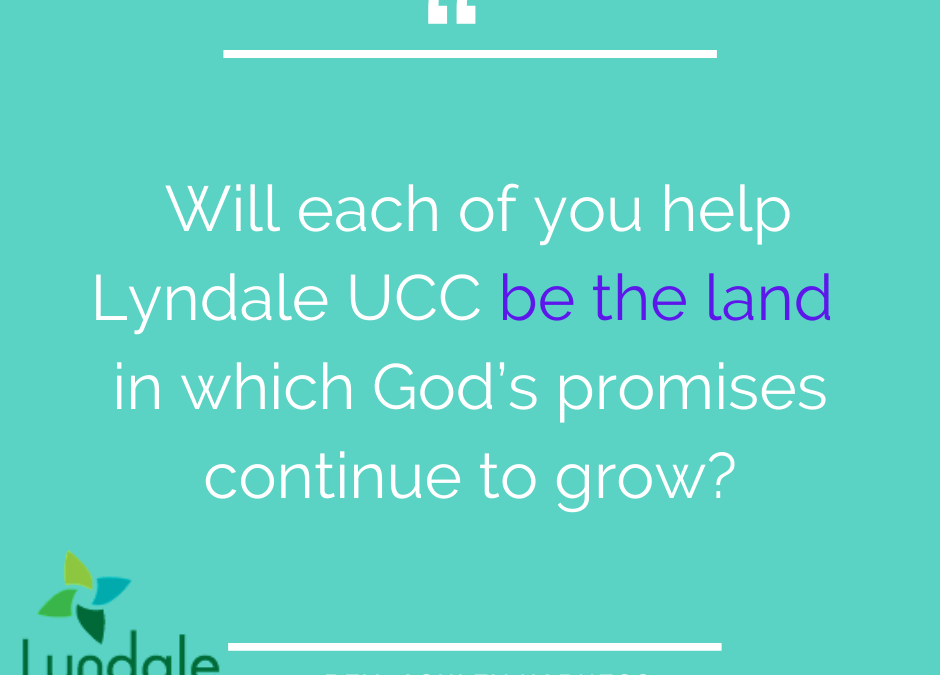 What in the world is going on in this scripture story? Did you tune out after the first of the hard to pronounce names? Or during the most detailed description of land transaction in the Hebrew Bible? This is one of those scriptures that I’m not naturally drawn to. But it’s a text that gives me hope, especially this Sunday so soon before the election when there is another tyrant trying to turn his time in office into a time on a throne. It’s a text that gives me hope when there are other sieges happening, a viral siege and surge, white supremacy’s on-going siege, from the latest Supreme Court appointee process and the new sieges she poses to so many of our basic rights… the list goes on. This text inspires me as we enter stewardship season to live and invest into the future even though it sometimes feels impossible. Let me back up and tell you a story.

I grew up in a gay family in Minnesota in the 1980s. Think Ronald Reagan. Think men dying of AIDS right and left for years before President Ronald Reagan would even say the name of the disease. Think “gay” being equated with “cancer” – AIDS the “gay cancer.” Think of the ravages of human flesh and caring for the dying and feeling… under siege. It’s not Ancient Israel and the Babylonians, but this is my first entry point into Jeremiah.

Now, think of my parents – two women – standing in their 1970s flower child dresses at the only church in town that would have them celebrating a commitment ceremony. They’d never been to one of these ceremonies before. They would never in their wildest dreams have thought to call it a marriage. But they did it anyway. They stood in front of witnesses, they signed their own private deed, they paid the fees. They leapt into the unthinkable, the unspeakable truth of their family. They invested in the future of a family they didn’t even know how to imagine – at least in the world under siege by their own private Babylon. It was an act of hope in their love, in their gay and lesbian community, in the idea of a future despite the ravages of AIDS and the impossibility of their union in the eyes of the vast majority. My parents, in their own way like Jeremiah, they reached into God’s promise of a loving future and they bought the proverbial field!

Fast forward almost 40 years and I’m back in Minnesota after another lifetime on the east coast and raising my own queer family during another kind of pandemic. I get to call Angela my wife. The field is flourishing. And yet, there is another president refusing to honor the seriousness of the disease, refusing the care for the people who are most at risk of death – this time our elders, the people who have lived without good healthcare for generations in poverty and enduring white supremacy. The ravages of this virus make us also feel under siege, and a lot like Jeremiah, grappling with how to live in this time.

But what does it mean for me, for you, and for us NOW to embody the kind of faithfulness and hope that Jeremiah does when he buys the field? Jeremiah and his larger community were under siege by the Babylonians. Jeremiah was being held under functional and indefinite house arrest in the King’s palace for his prophetic activity. Jeremiah was also a member of an elite class of citizens connected by family to the King and wealthy enough to buy land, the primary unit of economic and social well-being of his time. But who buys land while indefinitely imprisoned during a seemingly endless cycle of colonial occupation? Jeremiah, on God’s command. Because land, fertile land, homeland, is a symbol of God’s promise of faithfulness to God’s people throughout the bible. Which means that through buying land, as one scholar puts it, “Jeremiah invests in God’s promised future exactly when that future seems completely closed off.”[1] Jeremiah says “yes” to God, to trusting God, to meeting God’s love and faithfulness with his own love and faithfulness exactly when he seems to have every right not to.

Unlike Jeremiah we are not living under colonial occupation, but in fact those of us who are non-Native are occupiers ourselves. God’s promises of land as symbol have been perverted into land as commodity and used to justify harm. Think of Manifest Destiny and the church doctrines that justified genocide of Indigenous peoples. Think of the global doctrines that have mixed theology and state power to craft deadly justifications for slavery, colonialism and wars across the centuries of the United State’s existence.

AND yet, we too are called to “invest in God’s promised future exactly when that future seems completely closed off.” Perhaps we are not called to buy the land literally in these times of late stage capitalism and empire. If anything, I imagine Jeremiah might discern God’s will to return land instead, to repair and heal our relationship to the land. So perhaps investing in God’s promised future when it seems completely closed off means we are called to BE the land together instead.

Before you decide I’ve lost it, hear what one scholar says about Jeremiah’s historical context: “The land [in his time was thought of as] … essential to well-being, … [to] bestow identity; it was the instrument of participation in the society as an equal, the foundation of freedom…”[2] Let that sit with you a moment.

I don’t know what it will look like. I have a feeling it will mean being the kind of church that held a commitment ceremony for two women in flower dresses decades before gay marriage was on any policy agenda, when it seemed a future impossibly closed off. We didn’t house that ceremony at Lyndale, but we are that same kind of church seeking to be God’s future now. Can you let yourself imagine? Where do you want to be 1, 5, 10 years from now? Where do you want this church to be?

For thus says the Lord of hosts, the God of Israel: Houses and fields and vineyards shall again be bought in this land.

Will you join me, Lyndale? As we enter stewardship season now, will you help me invest in God’s future, in our future as Lyndale and as God’s co-dreamers even though it sometimes feels impossible to imagine the future these days? Will you let us hold you if you need to offer less than last year for your pledge and know that you are deeply beloved no matter what? And will you stretch yourself if you can this year to give more and also know you are deeply beloved no matter what? Will each of you help Lyndale be the land in which God’s promises continue to grow?