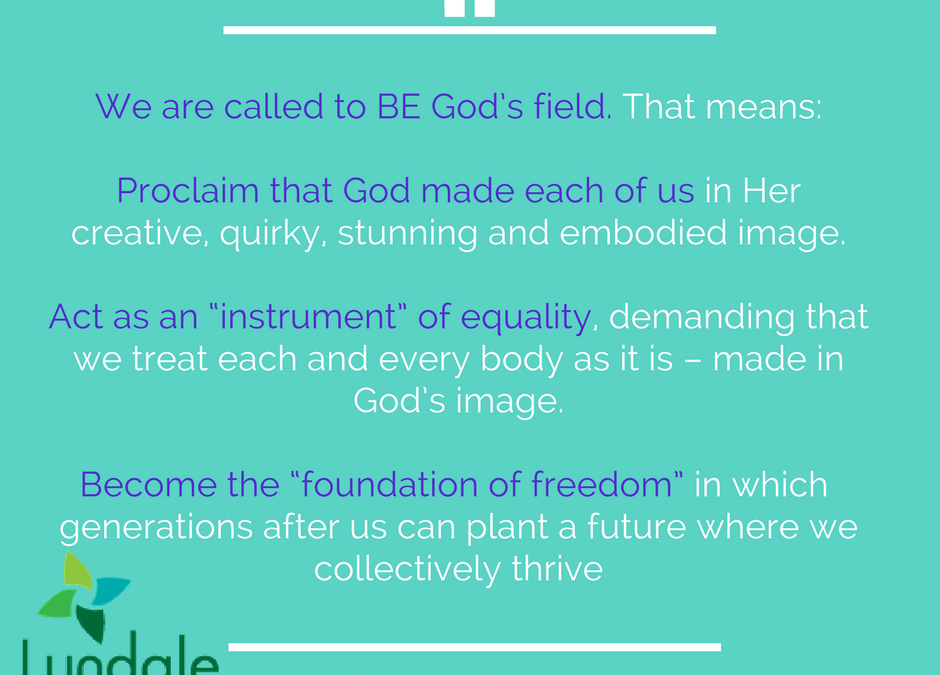 Brigitte grew up in East Germany in a family and a country living with the fresh scars of World War II. Her family was Christian, the religion that had been used to support the extermination of about 6 million Jewish people in the Holocaust. Her family was still whole and alive. I don’t know if her parents had been resisters under Hitler, but I know she was haunted by his legacy.

I met Brigitte many, many years after she was a little girl first asking questions in her Christian home in East Germany about what happened, what went wrong, how her religion was a part of it all. I met her when she stood in front of my classroom in New York City teaching a class of someday-ministers about how to read the scriptures – like ours this morning – attributed to Paul. She chuckled in her gentle way, with a board smile as she talked about the irony of Paul’s texts being interpreted as anti-Semitic, patriarchal and supportive of the oppressive political status quo. For Brigitte, Paul is the opposite. He is a skilled and yet savvy revolutionary whose writings she reads from within her own experience of growing up haunted and in the shadow of Nazi Germany.

This is the thing. We practice a religion that hinges on the idea and reality of incarnation, God coming into the world in our very bodies (ALL of them) and in our collective BODY that we call the body of Christ. On the most basic level, this is the primary metaphor of our faith that should inform how we read the rest of the bible. The body is beloved so intensely by God that God chooses to be born within it.

Enter Paul. Paul is living in ancient Rome. He’s a Jew talking to various Rabbi-Jesus-following-Jews who have become a little undone by the stress of Empire around them (nothing we can relate to!). There are various movements afoot of people trying to figure out what it means to follow Rabbi Jesus after his death. Here’s an analogy: Think about all the different ways people think there are to follow MLK Jr. some 50 years after HIS death and you’ll get the idea a bit more. You have Black Lives Matter and the more radical Black Liberationists and the NAACP etc. There are so many different ways of living into his words. Paul is dealing with a similar situation. People were becoming divided over whose interpretation of Jesus to follow – Paul’s or this guy Apollo’s and probably others. And Paul is writing to this community in Corinth, probably with his head in hands going “STOPPPPPP, People. You are missing the whole point now.”

This is where Paul uses the metaphor of flesh that confuses many of us today. According to Brigette, or Professor Kahl, one of the now pre-eminent Empire Critical scholars of Paul, Paul talks about flesh as a symbol of submission to the rules of Emperor Ceasar. Flesh was a symbol of that in us which is most vulnerable to making an idol of power and control. Flesh is vulnerable to the temptations of what gets translated as fornication or prostitution. But the biblical Greek word for fornication and prostitution is actually porneia, which also means idolatry.

This is the link: those who were prostituted in Paul’s world were those who were enslaved by the conquering Roman army – men and women alike. To fornicate was to rape these prostitutes, as an act of securing power over those nations and people who were conquered. This is what Paul is associating with the word porneia – violent abuses of power and probably more subtle forms of worship of that power. Rape is an extreme example of power and control over, but we encounter subtle forms of this all the time in life.

So in our text this morning, Paul is calling this out the Christian community in Corinth. He is saying, don’t worship power – the power of leaders like himself and Apollo – or in the larger world of Emperor Caesar and the way his armies conquer and control. That’s porneia. That’s idolatry.

Instead, we are called to a different kind of relationship with power, Paul is telling us. We are called to be God’s field through which God’s power works and grows.

WHAT does that mean?! Fields and lands throughout the Hebrew Bible and New Testament are a sign of God’s promise and presence made manifest in our world. And as one scholar explains, “The land was not only the basic economic good in society, essential to well-being, but it also bestowed identity; it was the instrument of participation in the society as an equal, the foundation of freedom…”[1]

Let that sit with you a moment. Listen. We are called in this text not to worship the powers that divide us from our bodies and each other, but to BE God’s field. We are called to be the living, composting, mulching, growth bed of God’s nutrients and presence that sustain us and our communities. We are called to be “bestow identity,” to proclaim that God made each of us in Her creative, quirky, stunning and embodied image. We are called to be an “instrument” of equality, demanding that we treat each and every body as it is – made in God’s image. And finally, we are called to be the “foundation of freedom” in which the generations after us can plant and live into a future where we collectively thrive.

Be the field. Be God’s field. Sit with that image for a moment now and just breathe. Feel the air make its way all the way into your belly. What part of the field are you? Are you a seedling? Of what plant or crop? Are you a growing plant, feasting on sunlight and pushing your way up and up into the sky? Are you a garden worm, tunneling deep and processing the soil through your body? Perhaps you are having a day when you feel frankly more like manure. But even manure is essential to a field’s health. Sit with this image this week of being God’s field. When the world feels like nothing but manure, come back to the field and remember your call. You are God’s field. Source of God’s presence, made to proclaim our equality as no more and no less than equally made in God’s embodied image, the foundation of freedom for generations to come.