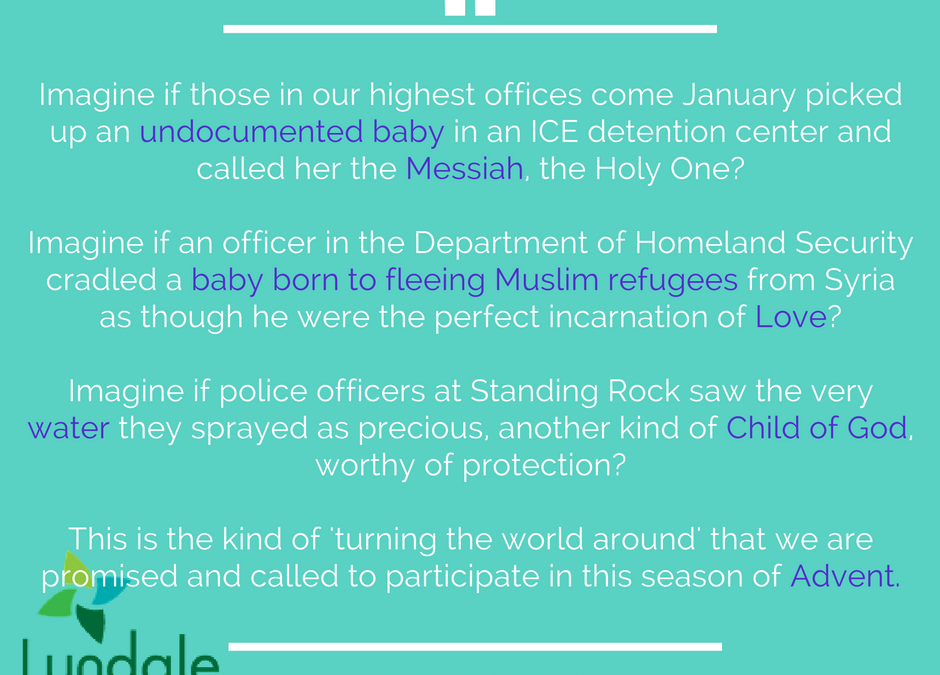 Every year, it strikes me as both perfectly reasonable and entirely strange that we start the season of Advent with a text about the end of the world as we know it. The version we get this year makes me mentally itchy. How many of you have heard of the Left Behind series? They are a series of wildly popular apocalyptic books, kind of like Christian Stephen King style fiction. They have sold over 65 million copies. The theological gist of them is supposed to be based on the bible’s prophecy of the rapture, where the “saved” are magically whisked away to heaven while the rest of us – it would be us, you know – wind up here in absolute hell.

In case you hadn’t figured it out yet, this is NOT my theology. I think it’s also just bad bible reading. These apocalyptic parts of the bible are not about some far off future of mass destruction where God’s love is made so small that only some of us are considered worthy of healing and wholeness and justice in some distant world. No. These texts are like Harry Potter books or good sci-fi, filled with analogies about the world we live in here and now. They are about the choices we have to make to live well now and the way God manifests in our lives here. Plus, they are about a good dose of unknowing, of mystery and how we live in the mess and pain of the world right now.

This scripture is supposed to help us understand where the world is when we start the season of Advent, the on-ramp to the season of Christmas. And right now, the beginning of Advent, feels like the world is ending for too many of us. All you have to do is open up a newspaper or scroll around on Facebook to catch a glimpse of what feels like apocalypse. Some of it is surely hyperbole, the product of our outrage apparatus that social media enables. But far too much of it is real this year. Far too much of it feels like a throw back to times in this country when the basic dignity and rights of too many of us were not yet sanctified by law. I don’t need to recite the litany. Like the people of Jesus’ day, we too know what Empire looks like. Suffice it to say, I’m starting to understand the story of Noah and the Ark as a kind of giant ‘force quit’ of the program that is civilization because oh my goodness what we have done is a mess.

Enter, the Season of Advent. And instead of God suggesting a giant ‘force quit’ on creation where only a few of us are going to make out of here a la Noah, there is a very different way forward waiting for us. Advent is the season of God and us together ‘Turning the World Around,’ as the hymn goes. It is the season when we await the birth of Divine love and power in this world in the form of a squishy, vulnerable, poor, homeless, Jewish, brown, refuge-seeking baby. That image of the Divine is enough to turn the world around, right?

Imagine if those in our highest offices of the land come January picked up an undocumented baby in an ICE detention center and called her the Messiah, the holy one? Imagine if an officer in the Department of Homeland Security cradled a baby born to fleeing Muslim refugees from Syria as though he were the perfect incarnation of Love? Imagine if police officers at Standing Rock saw the very water they sprayed as precious, another kind of Child of God, worthy of protection? This is the kind of turning the world upside down that we are promised and called to participate in this season of Advent.

The traditional Advent season hinges on the lighting of the Advent candles, each symbolizing a different aspect of the Divine we’re waiting for: Hope, Faith, Peace and Joy. In the context of consumer Christmas, those words have lost some of their power to us. So we’re giving them back their teeth at Lyndale this year. Our four weeks of advent center on defiant hope, faith through community, resilient peace and revolutionary joy. This week is about defiant hope, hope that is a practice of spiritual resistance, a reality we seek in defiance of the appearance of doom and gloom.

There is an important relationship between defiant hope and the scripture we have for today. Experiencing Divine defiant hope depends on being awake in the midst of the daily work of preparing food and eating, working in the field or the office, dating and marrying, etc. Because it is in the midst of that daily life that God breaks into our homes and our lives. The fancy, Greek term for the coming of God described in our scripture is parousia. It’s most literal translation is simply “being present.” So we are called upon to be awake enough to notice God being present, right here, right now, embodied in defiant hope.

One more nerdy word history: The word for Hope in Hebrew, Tikvah, is from the root Hebrew word Qavah, which is most commonly translated as “to wait.” Other translations include, “to gather together” or “to bind together (perhaps by twisting)” or “to look.” God’s presence in defiant hope, then, is rooted in our gathering or binding or even braiding ourselves together, not in some enmeshed and unhealthy way that erases our autonomous particularity, but more like a tapestry. A tapestry is made of individual threads gathered and bound together into something more than themselves. This is where hope dwells defiant of the systems that want to tear us a part.

Let me tell you where I’m seeing us bound together in Divine, defiant hope. I’m seeing it in our very community. I’m seeing it in the act of our own Rev. Dr. Rebecca and her partner Maggie celebrating their tenth wedding anniversary yesterday and proclaiming publicly on Facebook: “[We were] Married before it was legal and [we are] staying that way whatever comes.”

I’m hearing defiant hope in the wisdom of our own survivors of sexual assault who have gathered together to teach this community about rape culture and also to dream about things like starting a community fund for survivors in financial need due to the aftermath of trauma.

I’m witnessing defiant hope as we begin the work our racial justice taskforce has carved out for us, beginning with understanding our own stories of race and whiteness in particular.

I’m listening to defiant hope in the witness from Patrisse Cullors, Co-Founder of Black Lives Matter and also Director of the Truth and Reinvestment Project at the Ella Baker Center for Human Rights. She said this in a recent episode of the podcast On Being:

“For me, the hope lies in the movement… In the last year and a half, from the black community in and of itself, as we say “black lives matter,” you see the light that comes inside of people … You see people literally transforming. … for me, that is a spiritual work. It’s a healing work …. Human to human, if you take a moment to be with somebody, to understand the pains they’re going through, you get to transform yourself.

… Black Lives Matter is a rehumanizing project. We’ve lived in a place that has literally allowed for us to believe and center only black death. We’ve forgotten how to imagine black life. Literally whole human beings have been rendered to die prematurely, rendered to be sick, and we’ve allowed for that. Our imagination has only allowed for us to understand black people as a dying people. We have to change that. That’s our collective imagination, someone imagined handcuffs, someone imagined guns, someone imagined a jail cell. Well, how do we imagine something different that actually centers black people, that sees them in the future. Let’s imagine something different.”

I’m seeing defiant hope in the powerful leadership of young Muslim women, standing defiant in the face of a pending registry of American Muslims by the Trump administration, like Linda Sarsour who leads the Arab American Association of New York:

“I am saddened, but I am still hopeful. There’s a new generation of Muslims who will stand tall and firm because we understand that JUSTICE is NOT JUST-US. We are the leaders we have been waiting for.”

I’m hearing defiant hope in the work of our partners at Jewish Community Action in the Twin Cities. Carin Mrotz, who works for them, wrote this after seeing the blitz of recent anti-Semitism:

“We won’t end white supremacy by fighting just one leg, we have to work together, in relationships, or it’s still standing, still coming for all of us. Last night, at a JCA listening session with our community, a JCA member, an elder, named this. He said, “We are experiencing anti-Semitism, and now more than ever we need to be in relationships with our Muslim neighbors, immigrant communities, people of color to fight all of the ways this manifests.” We are stronger together, now is the time to join hands more than ever before.”

I’m reading defiant hope in the powerful testimony of the water protectors at Standing Rock in the aftermath of the announcement by our government that they will forcefully remove the water protectors from their own land by December 5th. Dallas Goldtooth, one of the many leaders protectors, said this:

“Threats of forced removal from our own land? Paternalism and state oppression….pssssh, this sh*t ain’t new for us, ennit? Whether we are Dakota, Lakota, Sahnish, Nueta, or Só’taeo’o…. this is the land where our ancestors dreamt of our songs and lives, long before the blue coats came, long before so-called America got its democratic ideas from the Haudenosaunee, long before this #NoDAPL fight even began….this land and water fed us. So we stand by our original instructions, as Indigenous Peoples, ready to defend the dreams of our ancestors and protect the sacredness of Mother Earth. We stand by our rights to self-determination and justice. We stand by our territorial treaty rights. So I say, don’t panic relatives, we got this. Hard times may be ahead, but we got this. We are our ancestors’ wildest dreams and we got this. #IndigenousRising #OcetiRising”

My fellow Lyndalians, be ready. Stay awake to God’s presence in the ordinary work of your life and in the extraordinary power of love and justice breaking in through our struggles. Defiant hope is trying to be born among us. May we notice Her.