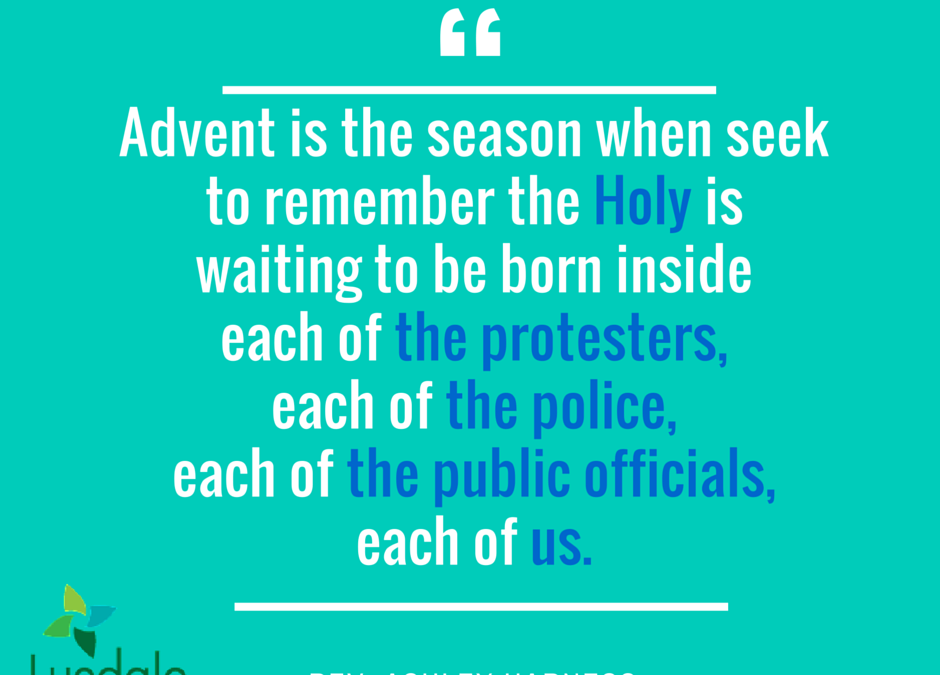 Welcome to Advent, the season of darkness in which we await the birth of God with us – Emmanuel. I love this season. I love the cozy, dark and cold nights with a fireplace and family. I love the smell of Christmas trees and the ritual of hanging the lights, squinting my eyes as I was taught as a child so that I could see if there were holes I had missed as I strung them on the tree. I love the glittery tinsel, even though we don’t use it anymore because it’s terrible for the environment. I love the Christmas music we’re not supposed to listen to yet as good Christians because it’s technically Advent and not Christmas yet. If you’ve seen that movie Elf with Will Farrell, I’m like him – a bit of an oversized child, giddy about this time of year with all the lights and cheer.

And yet, that’s not really the biblical story of Christmas. It’s certainly not our scripture today. Speaking of our scripture today, what in the world are we doing talking about the end of the world at the start of Advent? And also, didn’t I just preach on another story of apocalypse two weeks ago? I did. That was the week I reminded us that apocalyptic early Christian writing comes out of a tradition we should think of like ancient sci-fi or fantasy. It’s meant not to predict the future, but to help us see the present more clearly.

And honestly, this scripture does help me look more piercingly at the world we live in today. We live in a time that can feel like this apocalyptic chaos Jesus describes. We live in a time of tremendous distress among the nations. Distress feels like an understatement, in fact. People all over the world are not just fainting, but acting from fear and foreboding. People not just far away, but right here in the Twin Cities too. Living out of fear and foreboding would be a generous way to describe the white supremacy and police brutality we’re seeing erupt in our own beloved city these last few weeks.

But I want to be clear. What we are seeing now in the Twin Cities is not just about Jamar Clark, the man who was shot and killed by the police in North Minneapolis on November 15th. What we are seeing is a reckoning of race relations that’s been in the works here in Minnesota for at least the last 40 years. From 1970 to today, the Twin Cities has swelled in its minority, Black-identified population from just 2% to 8.4%. Meanwhile, for census indicators such as household income, homeownership and educational attainment, Minnesota has become the worst state for financial inequality in the country.[1]

At the same time, our country has gone through a revolution in terms of how we understand race, particularly along Black/White lines. Yes, we still see violent white supremacists – even here in our beloved city in the last week – shooting Black people. But much of how racism and white supremacy rear their ugly, apocalyptic heads in our daily lives and in our own community is not nearly so obvious. It’s become coded in the new language of criminality.

Michelle Alexander – civil rights lawyer, legal scholar, and author of one of the books we are reading in this fall’s racial justice book club, The New Jim Crow, puts it this way:

What has changed since the collapse of Jim Crow has less to do with the basic structure of our society than the language we use to justify it. In [our] era of colorblindness, it is no longer socially permissible to use race, explicitly, as a justification for discrimination, exclusion, and social contempt. So, we don’t. Rather than rely on race, we use our criminal justice system to label people of color “criminals” and then engage in all the practices we supposedly left behind. Today it is perfectly legal to discriminate against criminals in nearly all the ways that it was once legal to discriminate against African Americans. Once you’re labeled a felon, the old forms of discrimination- employment discrimination, housing discrimination, denial of the right to vote, denial of the educational opportunity, denial of food stamps and other public benefits, and exclusion from jury service- are suddenly legal.[2]

We’re seeing this paradigm manifest among seriously progressive white folks in Minnesota right now as the Jamar Clark case unfolds. In my Facebook feed, there are a lot of questions like this, “Didn’t Jamar have a criminal record?”; “Why are we defending somebody who abused his girlfriend?”; “Why are they asking to release the tapes when there is a criminal investigation that still needs to happen?”; “Shouldn’t we wait until we know the facts of the case?” I don’t want to dismiss these questions. Questions are important. But I want to remind us that on-the-spot execution is not a legal response to any crime in this country.

Also, there is a deeply white premise to these questions that is hard for many of us to notice because it is as invisible to us as the air we breathe. That’s what privilege does. It normalizes the privileged experience of the world. But it’s important to acknowledge that these questions I just articulated come out of a particular experience of the criminal justice system – one in which the police are people we call when we need help, prosecuting attorneys are people we trust to have our best interest in mind, and the criminal justice system as a whole makes us feel safer in the world. This is a white reality. It is an entirely different reality than the one Black Minnesotans experience regularly. Jamar Clark’s shooting by the police is merely an extreme example of a lived and highly racialized experience of fear, police brutality, inequality and categorical criminality that haunts the day-to-day lives of Black Minnesotans.

That’s what the protests are about – that whole reality of the way black bodies are systematically criminalized, brutalized and feared instead of treated as beloved and made in the image of God. All the demands from the Black Lives Matter organizers are about manifestations of that most basic struggle to matter in the eyes of the law and the eyes of fellow Minnesotans.

Now, what in the world does all this have to do with Advent? A lot, I think. I’ve just given you some context on the chaos and the fear and the distress among nations from our scripture today. But that’s just the backdrop for the refrain of this text. Jesus essentially says “pay attention” three different ways here. He says, “Raise your heads,” “Be on guard,” and “Be alert.” He’s asking us to look out for the Child of Humanity, the Christ presence in our own chaotic world. But this text is placed at the beginning of Advent because it reminds us that this chaotic world is the same world into which God chooses to become enfleshed, incarnate among us as living Hope.

In the tradition of many a feminist theologian, but Catherine Keller specifically, I don’t understand the incarnation as an “exclusive subject to be worshiped” but as an “inclusive possibility to be actualized” in all of creation.[3] Advent is the season when seek to remember the Holy is waiting to be born inside each of the protesters, each of the police, each of the public officials, each of us.

This Advent season, our theme at Lyndale is a question: “What are we waiting for?” As you go about this season, I invite you into this question. I invite you specifically into the not-knowing part of it. That has been one of the hardest parts of the Black Lives Matter protests for me over the last year or so. I don’t know so much. Growing up white and buttressed by class and race privilege in this state, I have no idea what it would have been like to grow up in the body of Jamar Clark, or the bodies of the 11 eye- witnesses in the housing complex of North Minneapolis who claim he was handcuffed on the ground when he was shot, or the BlackLivesMatter organizers who seek non-violent justice.

But it is in knowing my ignorance that I am beginning to learn how to stand in solidarity with the divinity being born among all of us this season of Advent, the Hope incarnate among us. This is not something new. It’s a posture of prayer that goes back at least to philosopher Nicolas of Cusa in the 1400s who called for “knowing ignorance” in relation to God. He called certainty about God idolatry.[4]

This Advent season, let us practice knowing our ignorance to what is being born in our midst, especially the divinity in the bodies of those who look different than ourselves. Because something beautiful and divine is being birthed in our city at the 4th precinct too. When we pay attention, raise our heads, be alert and on guard as Jesus asks us, we too can see the God of Hope waiting to be born at the edge of our city’s chaos.

Let me tell you where I’ve seen Her:

It’s in the eyes of the hijabi Muslim woman in her 60s who showed up to march the day after the white supremacist shootings of 5 black protesters, despite her arthritis because she knew both her humanity and her oppression are entangled with the Black Lives Matter protesters. It’s in the elementary school kids on the school bus whose way was blocked because of the march, but they put down their windows to chant alongside that “Black Lives Matter!” It’s in the white, male Lutheran pastor in his 50s who has been at the 4th precinct almost every day and says the young people camped out there are some of the most passionate and grace-filled people he has ever met. It’s in the laughter of the young black boy weaving through the crowds and passing out what feels like a sacrament in the freezing cold – hand warmers and hot pizza. It’s in the old black man who tells the crowd this is like the 1960s all over again, not to make us feel hopeless but to remind us we have ancestors in change-making. It’s in the black queer woman proclaiming her worth and the sacredness of her people as a swarm of white press shine on her. It’s in the grandmothers and grandbabies who emerge from their homes as the marches goes by and raise their fists in silent solidarity. It’s in the wisdom of this Lyndale community whose racial justice book club became a racial justice protest, whose participants showed up with intrepid curiosity to join in song and pray with our feet one night. It was in the mourning drumming and dancing of the Native American community – the beats haunting the crowd who knew how much life had been stolen over the centuries in the name of white safety from that community too. It was in the surprising protest chants of the perfectly blond and proper-looking woman from inside her car that was forced to stop in the middle of the highway 94 shutdown. It was in the arms of the young hijabi Somali girl and the white hipster kid linked to mine as we danced to the to the beat of resiliency proclaimed in the chant, “We gonna be alright.”

She is in all of us when we practice knowing our ignorance of all the ways she is waiting to arrive as Emmanuel, God with us. What are we waiting for this Advent season? We don’t know. Thank goodness. But we raise our heads to wait and watch with humble unknowing.

[2] Alexander, Michelle. The New Jim Crow: Mass Incarceration in the Age of Colorblindness, 2.