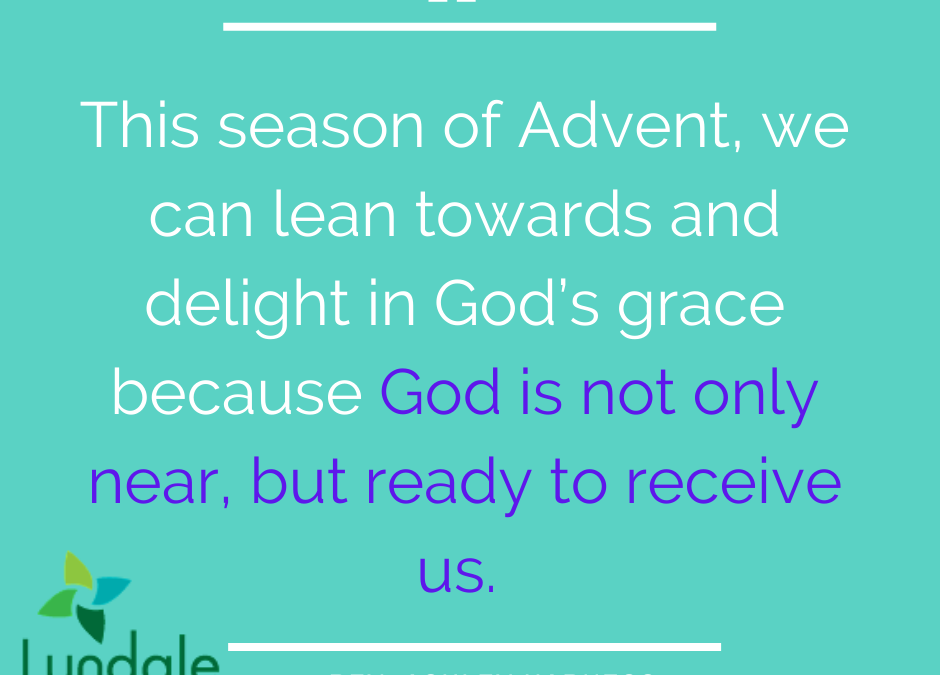 Scripture: Rejoice[a] in the Lord always; again I will say, Rejoice.[b] 5 Let your gentleness be known to everyone. The Lord is near. 6 Do not worry about anything, but in everything by prayer and supplication with thanksgiving let your requests be made known to God. 7 And the peace of God, which surpasses all understanding, will guard your hearts and your minds in Christ Jesus.

The last time I preached in mid-October, I was about to go on family medical leave to care for my mom Linda. This past Friday, as the snow began to fall for the first winter storm of the season, I sat down with a chocolate ice cream cone in one hand and today’s scripture in the other in front of an alter of photos of my mom – who died on November 3rd.

I had no idea when I left you all for my leave that this would be the end of my mom’s life. Parkinson’s is strange in that way. She lived for over a decade with this twisting and turning disease before the last two supremely challenging, but not actually life-threatening years. Then one night a few days after I began full time leave, I brought her some of her favorite chocolate ice cream and she called me back in a few minutes later, sobbing. She couldn’t finish it because she couldn’t swallow it. The neurological pathways that control the autonomic muscles we need to swallow were not working. Years earlier, she had told me that her measure of life being worth living was being able to enjoy her beloved ice cream. It had started as a joke. But it became very, very real as one autonomic system after another began to slow. It was just about two weeks after that night that my mom died, the Peace of the Divine guarding and filling all of our hearts with the end of suffering and tremendous love.

Shortly thereafter, my season of Advent began… a bit early by the calendar year, but right on time spiritually. It was initiated by our own Rev. Rebecca and our friend Pastor Jim Bear Jacobs when they came over to our home to remind us by their simple listening presence in the midst of a moment that felt like that end of our world that God, indeed, is always near. I asked them to come over to do a house blessing and help us release my mom’s suffering from the house where we all lived together these last years.

As Rev. Rebecca and Pastor Jim Bear sat in our living room, our stories poured out. They weren’t intentional prayers we were speaking, but sometimes the vulnerability of speaking our truths turns into prayer of its own volition. The last couple years, my mom’s body and mind held far, far more “worry,” as Paul calls it in our scripture, than the capacity to be present to joy. She wasn’t alone. We have been in a global pandemic. We have been living through deeply anxious times, all of us. And more so, that Greek word we have translated as “worry” means something far bigger than hand-wringing. It actually refers to the experience of being drawn a part, pulled in opposite directions, divided from wholeness. This is a far more accurate description of the suffering I have experienced and witnessed on both the macro-political level and within my own life, especially with my mom. As we sat in our living room together that afternoon after my mom died, we spoke of struggles to communicate with my mom as her mind divided itself from reality these last years, slowly, in non-linear and confusing ways. We spoke of tending her body as it pulled away from her control and paralysis became a regular part of her days. We spoke of our grief as her life orbited out of wholeness and connection and shrank largely into the back two rooms of our house.

And then we moved into the ritual part of our time together. I had asked Jim Bear if he would feel comfortable bringing his sage and his indigenous tradition of smudging for those rooms where my mom had spent so much time struggling. I needed something beyond words to hold the “worry” of those rooms and carry it beyond our home. I needed something physical to hold the intangible of my prayers and us white protestants get a little stuck in the land of words.

As soon as Jim Bear lit the sage and began to move through my mom’s space, the prayers of supplication, the thanksgiving, and everything in between poured out as salty, silent sobs. I processed along my mom’s most common routes through her space, the places where she struggled most with her walker and got stuck and lost her connection to reality. We traced her footsteps to our dining room table where we sat together most nights to share dinner. And then to her favorite chair in the living room. And finally out to her garden path in her backyard where she used to love to sit. That’s where we released her spirit. And then where Jim Bear smudged my family to symbolize release of her suffering from within our very bodies.

When we came back inside, I had the feeling I always do after I finally let myself cry – tired wholeness. Like something has come back into alignment within me. Worry turned into worn and weary peace, my heart soft because it was no longer guarded by the proverbial Roman army of my own defenses, but God’s vulnerable care.

Jim Bear handed me a braid of sweetgrass. And lit the end. And we walked back through the house welcoming home sweetness, welcoming in newness, feeling the tenderness of gratitude and love for my mom’s lifeforce again and not just her suffering.

This is the work of Advent. It always begins with the story of the end of the world. Because the world is always ending, the destructive chaos of empires spinning out of control always needs our attention and also the worlds we have come to treasure are always ending, are always impermanent. Death is always real. Suffering is always too much. And too often we get lost in our own worry, in our own experience of the divisions of our bodies, our minds and our communities from integration and wholeness.

The spiritual work of Advent is to give back to God in prayer, in honesty, all that has become worry incarnate in our lives. Advent calls us to show God where it hurts, where we are suffering, and let God’s smudge of Grace release that suffering and bring us back into wholeness. Only then can we receive the sweetgrass, the newness, the presence of the holy JOY promised this season.

“4 Rejoice[a] in the Holy One always; again I will say, Rejoice,” writes Paul to the church community he founded. Embedded as I am in a season of grief right now, it can be hard to receive this instruction. Until I remember that Paul was also in a season of grief when he wrote, a different kind of grief. He wrote from prison where he was held as a theo-political prisoner for worshipping a God that was not Caesar. And yet he calls on his own grieving community to rejoice.

Again, something is lost in translation from the Greek here. Rejoice doesn’t mean happiness or denial of one’s true feelings. The command to rejoice is actually a command to “lean towards,” and “delight” in God’s grace. Rejoice! Lean your whole being towards holiness, whether in the form of an off-season chocolate ice cream cone or basking in the cold sunshine. Know that God’s grace will be waiting for you there because God is near, always. And while we are geeking out on Greek words, another translation for Greek word “eggus” that we have translated as “near” is the word “ready.” Lean towards and delight in God’s grace because God is not only near, but ready. Ready to receive YOU.