A God Who Sees 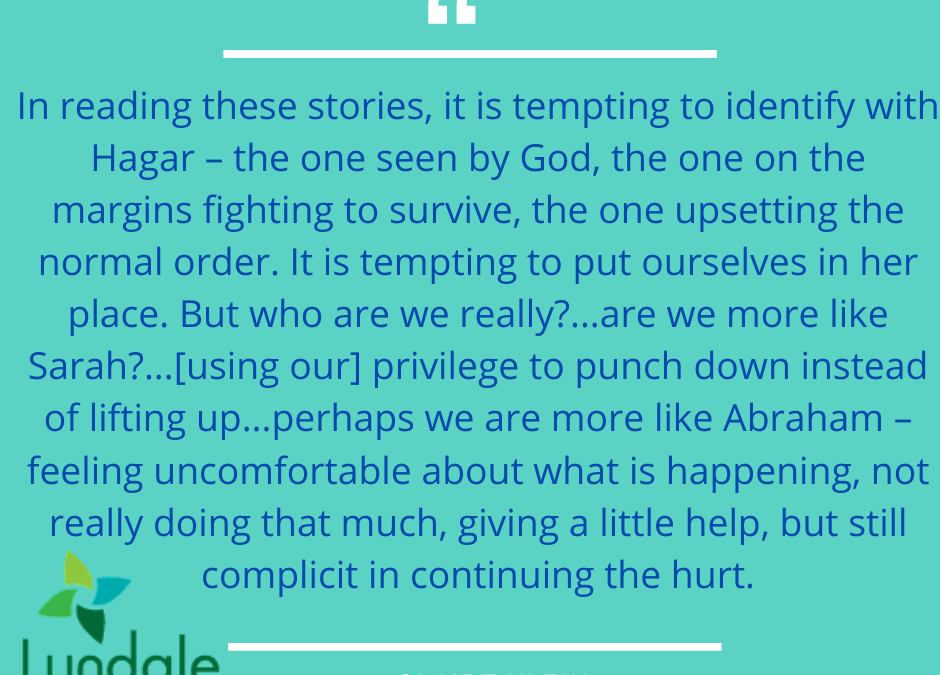 We often come to know women in the Hebrew Bible through their wombs – women’s fertility or lack thereof was a measure of their value in this ancient society. Being able to pass on one’s traditions, values, and religion, especially in a fringe oppressed community, was linked to one’s ability to birth other humans. In these origin stories, God had promised Abraham Land, Vocation, and Descendants no less than 11 times. He was promised descendants as numerous as the stars in the night sky or as the grains of sand on the earth. Sarah thought the promise of descendants coming through her was so absurd that she laughs at the very suggestion. So Abraham and Sarah (they are also called Abram and Sarai at times in these stories but that is a tale for another day, so I’m going to just refer to them as Abraham and Sarah for today) take matters into their own hands. They approach distant relatives to see if the promise might be fulfilled through them – Abraham’s  nephew Lot, another person enslaved -Eliezer, and when these don’t pan out, Sarah sought out Hagar, who Sarah had enslaved. Hagar was, as theologian Dr. Elsa Tamez observed, a woman three times oppressed – through her economic position as an enslaved person, through her foreign outsider heritage as an Egyptian and through her gender as a woman.

In a scene a few chapters back in the book of Genesis, Sarah tells Abraham to be with Hagar, definitely without Hagar’s consent. This is Sarah trying to take this descendant business into her own hands. A woman of privilege looking out for herself, leaning in, leaving others out. Hagar is treated not as a person with her own voice but as an object, a solution to someone else’s problem. Once Hagar is pregnant, we know that Hagar “looked on [Sarah] with contempt.” Sarah responded by “dealing harshly with Hagar.” So harshly, that Hagar would rather face the dangers of the wilderness than be under the rule of Sarah and runs away. That she would rather riot in the streets than be under the rule of status quo. Then God appeared to Hagar. God promised that Hagar will have a child. That a great nation will be born from her. Forget the stars shown to Abraham – this is Hagar’s moment.  Hagar saw God and God saw her.  A significant recognition. Hagar – Hagar the Egyptian, Hagar the enslaved, Hagar the woman – was the only woman in the Hebrew Bible to hear God’s voice directly. And the only woman to give God a name – El Roi  (Ale Rrrrro EEE) – the God who Sees Me.

But I think this seeing God still has some things to answer for. An angel tells Hagar to return to her abuser. We don’t really get much insight into what might have been Hagar’s internal conversation at this point. We know she felt seen and understood, but how does she feel about this deal to have descendants too numerous to count but had to return to these people? Hagar did return and gave birth to Ishmael. And this return allowed Ishmael to be circumcised and be officially recognized as Abraham’s heir. This return allowed her to survive. So perhaps she returned not as a person enslaved but as Ishmael’s mother and Abraham’s wife – as an equal.

So now we have heard the “previously on” segment and we pick up where this morning’s reading begins. Sarah has had her own child, Isaac, who was also weaned and circumcised. Sarah saw Isaac and Ishmael playing together as brothers. Ishmael’s presence complicates things for Sarah. Where once Hagar was an essential piece of the puzzle, Hagar and her son are now a threat to Sarah’s own son’s future. Ishmael was mixing up the order of things for Sarah so she demanded Abraham to throw Hagar and Ishmael out. Then God, again with some things to answer for, tells Abraham not to worry and to listen to Sarah.

Hagar is taken back out to the wilderness and when the water runs out, when her son can’t breathe, she can’t watch…. But YHWH, El Roi, The One who sees me, was there again. was still there. God continues to see and side with Hagar.

In reading these stories, it is tempting to identify with Hagar – the one seen by God, the one on the margins fighting to survive, the one upsetting the normal order. It is tempting to put ourselves in her place. But who are we really? One of my professors at United Seminary, Dr. Carolyn Pressler, continually reminded us to rightly situate ourselves in the stories we were reading. Are we in Hagar’s position or are we more like Sarah? Using Hagar when convenient and then sending her off when no longer needed and a threat to our happiness? Many Minnesotans and political leaders have felt stuck between supporting Black Lives and lifting up voices in theory but then struggling with following through as major reforms and changes are underway. As our comfort is threatened and stretched, we stomp out the voices that need to be heard and send them away. Sarah, an older woman who beliefs herself to be barren is trying to look out for herself and her family. She is struggling to survive as well, but hurts Hagar in doing so. She uses her privilege to punch down instead of lifting up.

In finding our right place in the story, perhaps we are more like Abraham – feeling uncomfortable about what is happening, not really doing that much, giving a little help, but still complicit in continuing the hurt.. And still expecting the fulfillment of what we believe is due to us. For me, the last few weeks have been a torrent of competing responsibilities, thoughts, needs, and selfish desires – wanting to fight for justice, considering the risk of COVID exposure that could be passed to my hospice patients, longing to be thought of as “woke” when people scroll through my Facebook feed, trying to be open to learning more, feeling guilty about needing to take a break. If I am honest, I am still searching for the best way to recognize Hagar, feeling bad and giving her water but without continuing to force her into the desert.

In the last month, we have heard the invitation to stop ourselves and listen. To witness. To see. Lonnae O’Neal, a senior writer at the Undefeated, wrote a piece for National Geographic reflecting on the Ones who truly see. She wrote:

“Momma!” Floyd, 46, calls out. “Momma! I’m through,” the dying man says, and I recognize his words. A call to your mother is a prayer to be seen. Floyd’s mother died two years ago, but he used her as a sacred invocation….I heard this black man had called out to his momma as he lay dying, and I too am a black mother. One of the ones since time immemorial who have to answer the sacred call. Who have to answer the call for the divine sisterhood of black mothers. Even when they are not our own, we are asked to bear witness….We are the ballast. The anchors. A way for those who are close to the edge to find their way back, or their way home. This is true for black mothers, who are especially tested and learned in all the dread fates of black bodies. We are the hedge against the people who don’t see us. We are an assertion of black life…. It is made sacred by our need to protect against all the people who think they hold dominion over black lives. Who overpolice or underfund, or over-report, or wag their fingers in our faces. The vacant-looking father and son with rifles in Georgia, the masked female portfolio manager waving her cellphone in New York, the reptilian officer who has learned how to kneel a man to death in Minnesota, may not see themselves. But we, the black mothers, see you.

May we, too, seek to understand, to bear witness, to see. Amen.

O’Neal, Lonnae. “George Floyd’s mother was not there, but he used her as a sacred invocation: With his dying breaths, Floyd called for her as an assurance of memory.” National Geographic, May 30 2020. Accessed June 19, 2020. https://www.nationalgeographic.com/history/2020/05/george-floyds-mother-not-there-he-used-her-as-sacred-invocation/#close

Tamez, Elsa. “The Woman Who Complicated the History of Salvation.” New Eyes for Reading: Biblical and Theological Reflections by Women from the Third World. 6-16. Geneva: World Council of Churches, 1986.