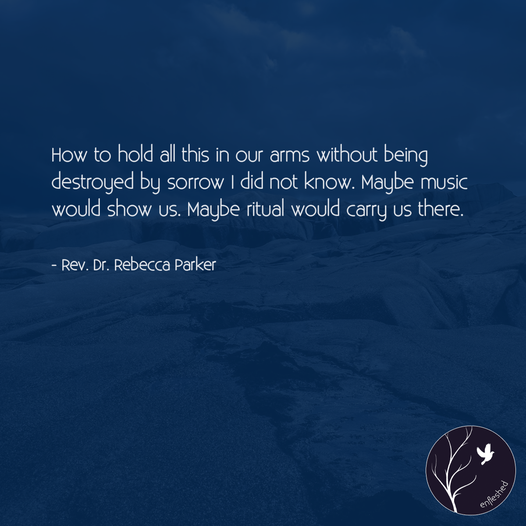 18My joy is gone, grief is upon me, my heart is sick. 19Hark, the cry of my poor people from far and wide in the land: “Is the Lord not in Zion? Is her King not in her?” (“Why have they provoked me to anger with their images, with their foreign idols?”) 20“The harvest is past, the summer is ended, and we are not saved.” 21For the hurt of my poor people I am hurt, I mourn, and dismay has taken hold of me. 22Is there no balm in Gilead? Is there no physician there? Why then has the health of my poor people not been restored? O that my head were a spring of water, and my eyes a fountain of tears, so that I might weep day and night for the slain of my poor people!

This scripture is the text Lyndale read the Sunday after 9/11 in 2001. Like the ancient prophet Jeremiah, you sat in grief and shock and lament together in hopes you would be able to feel the balm promised by God better when not alone.

What do you remember about that week?

I was a freshman in my first couple weeks of college on the East Coast. I remember sleepily walking down the hall in my dorm and seeing a building on fire on the lounge room’s TV. I remember thinking it must be some far-off war scene. I remember my dorm room phone ringing a few minutes later, my mom on the other end telling me a plane had flown into the World Trade Center. I remember going to class in a daze – a huge lecture class called Introduction to Political Thought and Theory. That’s where I was when the second tower was hit. And then when I came back outside on that absolutely perfectly crisp and sunny day after class, the towers had fallen. And so had the world I thought I knew.

We were cracked open as a country. So we did what empires do when grief overwhelms. We fight. We went to so-called War on Terror and we passed the so-called Patriot Act and the game of imperialism went to the next level. Hundreds of thousands more lives would end between then and now as we warred. I do not pretend to understand it. I do not have any idea what justice means at this kind of scale of trauma, collective histories, political complexity and global terrain. Afterall, I didn’t end up majoring in political science, as I thought I might that first couple weeks of college. Instead, 9/11 is part of why I became a pastor. But that’s another story.

As a pastor, what I see looking back and what I see today is still a country in grief. For some of us, the grief is fresh and alive in our bodies – that’s mostly my friends who lived out east at the time. For some of us, this grief is like smog. It’s the layer of the atmosphere filtering the light and messing with the air we breathe, but we might not even notice it because it has become so normal to us. No matter, it lives in our bodies also and is toxic over time.

But how do we clear the smog of this scale of grief? Writer and social justice facilitator adrienne maree brown writes, “How we are at the small scale is how we are at the large scale. The patterns of the universe repeat at scale..what we practice at a small scale can reverberate to the largest scale.”

So let us not be daunted by the expanse of this grief across time or space. Let us instead learn to live with this grief, or as theologian Rev. Dr. Rebecca Parker says:

“We must find how we can hold loss in our arms and move in rhythm with it. I said we cannot live until we learn to embrace life’s realities of betrayal, violence, suffering, and grief. How to hold all this in our arms without being destroyed by sorrow I did not know. Maybe music would show us. Maybe ritual would carry us there. But somehow, just as Mary had cradled her crucified son in her arms and wailed, we had to hold the bodies of earth’s violated people and voice our grief. Our grief might enable us, the survivors, to act in the world with determination and compassion.”

Today we have music. We have ritual. We have the ancestors of our faith tradition back to Jeremiah and Mary who remind us it is possible to let ourselves and our world be cracked open without being destroyed or destroying others. And this morning, in Elly’s garden, we also have trees. Which teach us to do the same. The Hebrew word for Balm, as in Balm in Gilead, refers to a resin-like substance that leaks from trees when they have cracked under pressure. It is literally a healing substance that is the result of breaking open. It is sticky. It is messy. But with time, tending and processing, it becomes a powerful tool for healing.

So today, as we honor the 20th anniversary of 9/11, let us grieve alongside Jeremiah, in the tradition of Mary, and with the wisdom of trees. Let us crack open again. Let us release a balm of tenderness and healing, determination and compassion that can reverberate to the largest scale with practice and time.