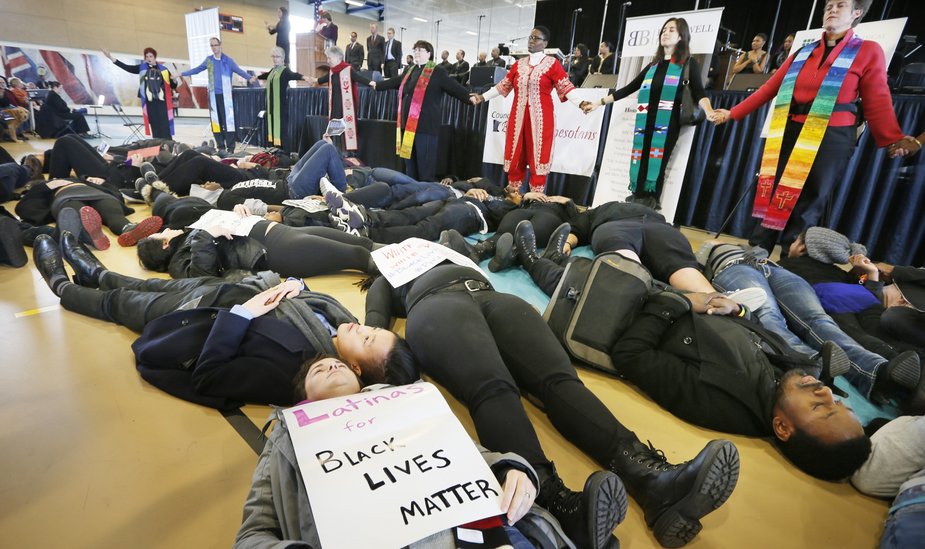 I was supposed to be writing a different sermon when I saw the news that 9 more lives had been lost to white supremacy in Charleston last week. As a white pastor of a predominantly white church in the Midwest, what was I supposed to do? What should all of us White Christians in predominantly white churches do? We are called to own our whiteness and all the gruesome history and headlines it holds. We are called to break open our hearts and spirits. In short, we are called to repent.

Because what happened in Charleston last week was a white supremacist terrorist attack by a man who called himself Christian, liked to wave the Confederate flag and wear Heil Hitler codes on his clothes. It was an attack on Black sacred space and on Black sacred lives that were made in the image of God. It was one more Black church terrorist attack to add to our white history of hundreds during the 1960s and many more before.

Many of us white Christians are justice-minded folk, longing for racial justice in our country and in our communities. But we are also inheritors of a white church tradition that includes not only abolitionists and civil rights fighters, but their unwanted cousins of racism and white supremacy. Our collective ancestors were part of the reason Emanuel AME church had to incite a slave revolt and then resist racism for the last 200 years. Our collective church ancestors surely justified slavery and Jim Crow with the Bible as some now justify police killings and mass incarceration, the latest incarnations of white supremacy.

We draw on the rich Christian tradition at our fingertips and we repent for the breach of violence in whose shadow we stand. Repentance is kind of a scary word for many of us who are recovering from our own encounters with abusive versions of Christianity. I feel like a bible-thumper just saying it. But the kind of repentance I’m talking about isn’t about self-flagellation or shame. It’s a way of taking healing action, of claiming agency when we hurt so much and world hurts so much that it feels unbearable.

Repentance, according to Psalm 51, first requires knowing what we did wrong, “for I know my transgressions,” says the Psalmist. We need to educate our selves. We need to do books studies in our churches of books like Michelle Alexander’s, The New Jim Crow, and Jennifer Harvey’s Dear White Christians. Again, it’s not about shaming ourselves. As Brene Brown, a psychologist and shame expert, says, “When we deny the story, it defines us. When we own the story, we can write a brave new ending.” Let’s know and own the story of whiteness in our country so we can do something more about it!

Repentance also requires a desire for justice and the Divine with us, Emanuel. Most of our churches have that in spades. That’s where our broken-heartedness comes from. “The sacrifice acceptable to God is a broken spirit; a broken and contrite heart,” continues Psalm 51. The sacrifice we are asked for to repent is the willingness to feel all that brokenness. And then, instead of just sitting in our own pain and guilt and reading endless horrifying news stories, we are asked to be brave enough to bring our broken spirits, our broken hearts, our broken hope to God.

I don’t mean the transcendent God here. To bring our broken hearts to God means showing up to where injustice manifests in our communities because we know God dwells there. This is what Jennifer Harvey, a white Christian ethicist, calls showing up with a “spiritual posture of repentance.”

With that posture, we can do something new out there in the world. We can “rebuild Jerusalem,” or our communities, as our psalmist calls us to – not in our white vision rooted in our own guilt and shame, but following the lead of the communities of color we have, throughout the history of this country, decimated.

A posture of repentance, an open, humble, broken heart, changes how we act so that we know how to follow. We might not know where we are going. In fact, we don’t. We are not the leaders this time. We are the followers. For white folks, this is one of the hardest postures we can take on, but it is the one to which we are called.

The other night at the local Minneapolis vigil for Charleston, a small group of about a hundred folks gathered in North Minneapolis to march and pray and celebrate the sacred that persists in Black bodies despite all the ways history has tried to kill it off. A group of mostly young Black women and children lead the march with drums and giant puppets of ancestral Black heroes. A trail of us white folks figured out how to follow them, pretty literally. We hung to the back of the march. We were rag-tag, trying to look like we knew what we were doing carrying our “Black is Sacred” signs and walking in silence. It was a little awkward, to be honest. But it reminded me of watching a toddler learn to walk too. They stumble. They fall. They cry sometimes. But they get up again. There is something innate in them that knows how to do this walking thing, with some practice.

I really believe we are the same way when it comes justice. We are going to stumble and fall and cry, especially us adults who are less used to learning new postures and ways of being. But with the strength of community and by the power of the Divine that dwells within us like a loving parent teaching a toddler to walk, we too will get up and try awkwardly again. We are made in the image of God to be innately drawn to justice and love, just as a toddler innately is drawn to walk.

“Restore to me the joy of your healing, and sustain in me a willing spirit,” I pray as the Psalmist does. Because I, like a toddler, want to walk. And not just walk, but as sister Simone Campbell of the famous and infamous Nuns on the Bus puts it, I want to “walk willing.” And then, blessed and broken-hearted, repentant and loved, I believe we can be enough to keep bending the arc of the universe slowly, slowly towards justice and love.